Winter, you have 9 days left.

It continues to be very cold here.  We still have snow over a lot of the yard.  The bird baths are frozen and the pond had a layer of ice on it for most of yesterday.  The warmth of the sun did help to melt away some of the snow, although it remains in the shady areas.
I went out to see how everything was looking.  I'm a little concerned about several of my shrubs with growing buds.  This hydrangea is one of my very favorites.  I've forgotten the name, and I saw that the tag has faded.  Each flower has cup shaped petals and it's a very pretty light blue.  After searching around on the web I think it could be 'Ayesha'.  Several years ago we had a late freeze like this, and there were no blooms on it. 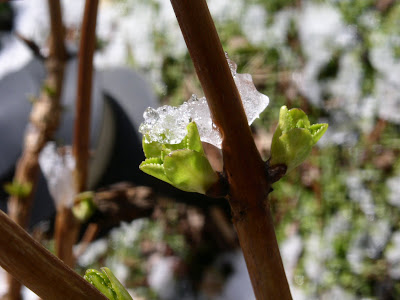 Hopefully the nice big buds on the lilac 'Ludwig Spaeth' won't be damaged.  I'm hoping they aren't far enough along to be cold injured. 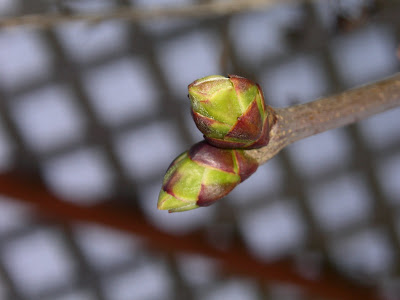 I read online that once the flowers on the blueberries have opened, they've lost all cold hardiness.  Damage can begin at 28 degrees.  It's definitely been colder than that the last few nights.  All 5 of the bushes are covered in buds that have begun to open.  I will be so sad if I lose those delicious berries. 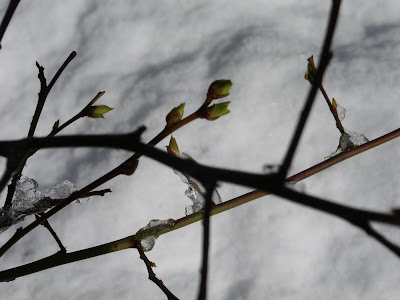 The birds continued to be very active despite the cold temperatures.  With the bird baths all frozen they were in the pond waterfall drinking. Lots of birds were in the trees soaking in the sun like this Robin.  Some of the Robins appeared to be fighting and flying at each other.  Is that normal spring behavior? 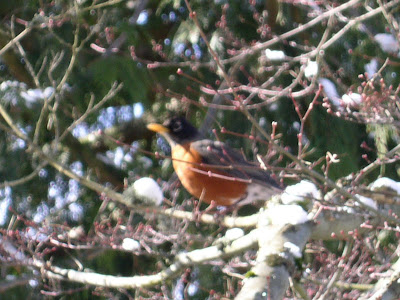 I was surprised to see that under the snow a new oriental lily had made it's way through the frozen ground.  I hadn't seen it a couple of days ago.  I did notice pieces of another bulb on the ground beside it.  I didn't see any signs of digging around it.  Could that be an example of heaving that I've read about? 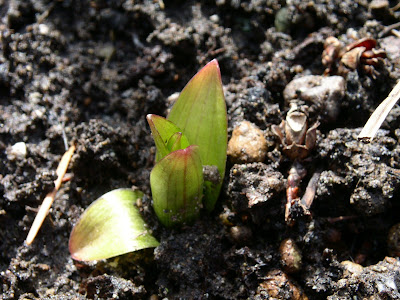 I found opening flower buds on the snowball bush.  It seems like it will be blooming early.  I think the plants are very confused this year. 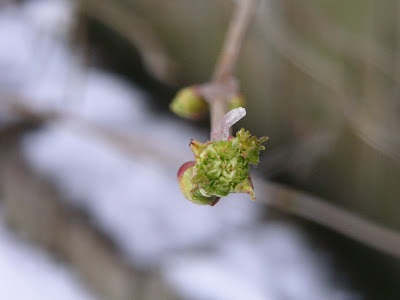 Last, I found this pretty hellebore 'Royal Heritage' under our cedar tree.  I hadn't really taken the time to look at it closely yet this winter.  I love it's deep color 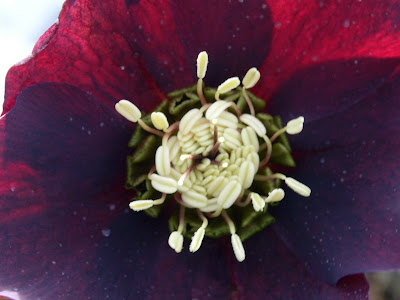 Posted by Catherine@AGardenerinProgress at 8:02 AM