On days that it ends up being too rainy or cold to do any yard work, I've developed a new pastime:  examining flower buds.  This is when I walk around looking to see how close the buds on various shrubs are to opening.  On plants that aren't as reliable about flowering, I may even go as far as to ever so gently pull the outer leaf back on a bud thats begun to break.  As you many be able to tell, I'm not exactly patient.
I've had this tree peony in this spot for about 3 years.  I had moved it a couple of times before I found a place it had room to grow.  It has taken it's time blooming, although I think that's pretty normal for them, especially after having been moved.  Last year I think I had 3 or 4 huge blooms, so far I can see 2 buds.  There is a lot of new growth on it as well.  The bloom time on tree peonies is usually late spring. 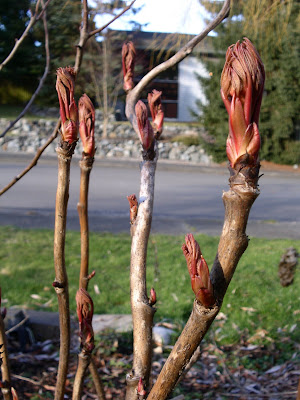 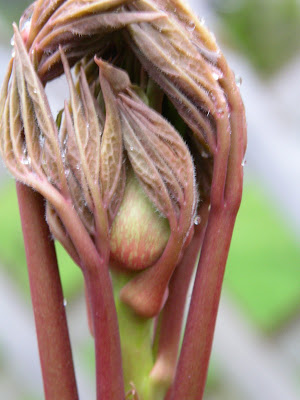 March 1
Another current stop on the examination list is the variegated daphne odora.  It has been taking it's sweet time.  It's been almost 2 months since it's buds started to open.  It's usual bloom time is January to February.  I'm just anxious to smell it's fragrance. 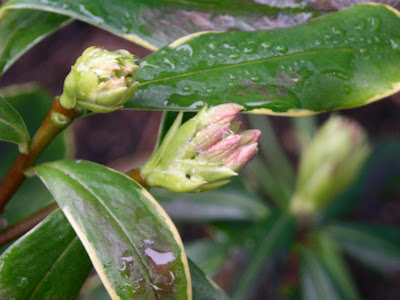 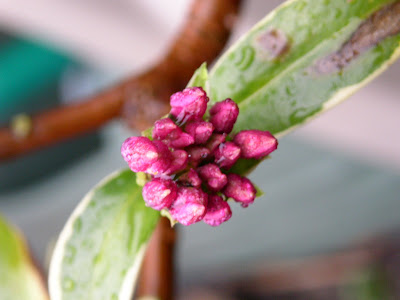 March 1
This is anther one I've been checking frequently, the pink flowering currant. Its first few years the blooming was sporadic.  A few branches would have flowers and the rest of the shrub would be leaves.  Last year it put on a great show, and I'm hoping it will do so again this year.  According to various sites I found on the internet its bloom time is May through June.  I know mine has always begun to bloom in March. 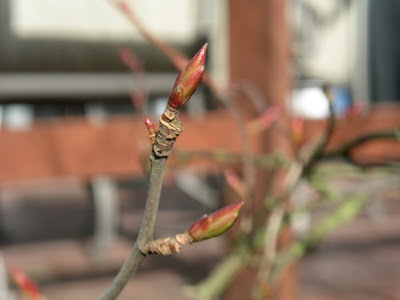 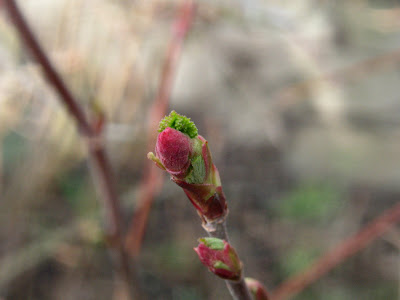 March 2
The lilacs will be next.  I have two varieties, syringa vulgaris 'Ludwig Spaeth' and syringa prestoniae 'Miss Canada'.  The second variety blooms around mid June and for a longer period of time after the other lilacs have finished.  They are newer plants in the garden and they really took off growing last year.  Since it takes several years to really get blooming, I think this should be a great year for them.

Posted by Catherine@AGardenerinProgress at 9:37 AM