A few days ago Dirt Princess at Trials & Tribulations of a Southern Gardener said she took the time to really notice the little things as she was on her way somewhere, was she on a journey or a destination?   She found lots of interesting sights and shared them on her blog.   She suggested others take the time to do the same thing and share their journey.
I'm pretty observant about most things.  I think a lot of that comes from being a nurse.  You have to be or you can miss something very important.  But I know that some days as I drive to my destination I'm not noticing some of the little things.  I tried to capture some interesting sights as I drove to my daughter's preschool and did errands the other day.  I pulled over to take the pictures, and so some are not as clear because I stayed in my car so it could be as accurate as possible.
As we left our home I noticed that my neighbors daffodils were beginning to bloom.  I had noticed the heather a few days ago, but not these daffodils. 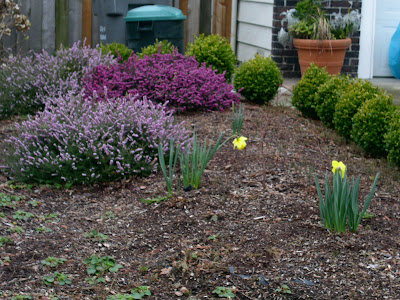 A little further away I saw that the church that is adding on, left the row of old crabapple trees in place.  I hadn't really thought about it until today.  They will be blooming soon and always are so pretty. 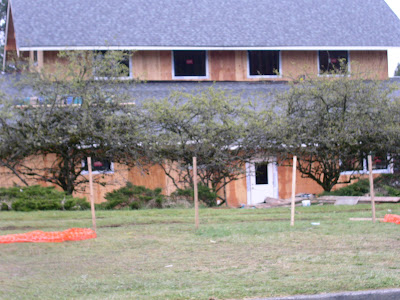 Down the road a ways I passed my best gardening friend's house.  I see the fruit trees in her "orchard" are beginning to bloom.  Before I knew her I watched all the work being done on her yard.  It was the talk of the neighborhood that someone was finally taking care of this large yard that had been neglected for years.  Now that I know her I get to enjoy it all the time. 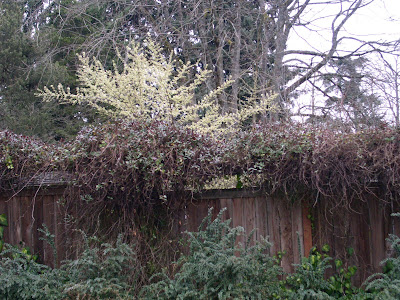 Driving down the highway the lights were all green (the only time I hoped for a red light and not one!) so I missed taking pictures of the small river that runs along side of it.  As we get closer to my daughter's school you can see a small pony area.  They had a sign saying that they did pony parties, but I have to say the quick glimpse into their stalls was not pretty.  I don't know much about horses or ponies, but it looked kind of crowded.  They had a large pasture around them.  Maybe they were eating inside, usually they are out of their barn. 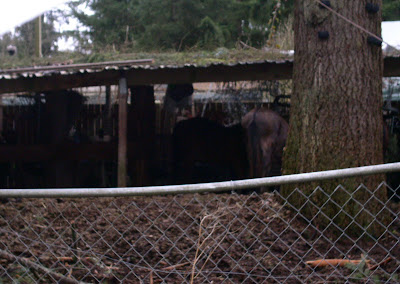 Here is one of the many Starbucks that we pass while we're out.   I guess that's what you would expect to see around the Seattle area. 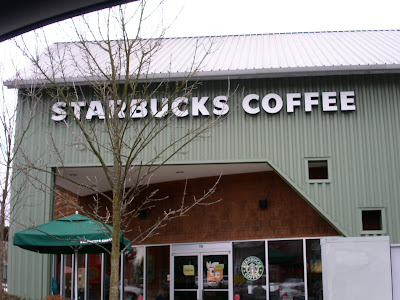 I took the long way home and passed another part of the river.  There are bike trails all along it and it's busy no matter what the season.  Very blurry I know, but I hope you can still see the beauty in it. 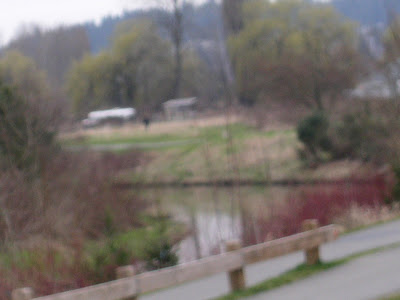 I also passed one of the wineries that is pretty well known,  Chateau Ste. Michelle.  Later in the spring I will go there for photos.  It's absolutely beautiful.  Well worth a visit if you are in the area. 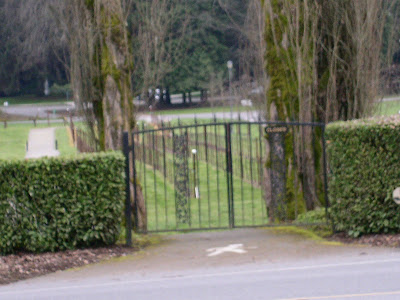 At a stop light I found a row of plum trees beginning to bloom. 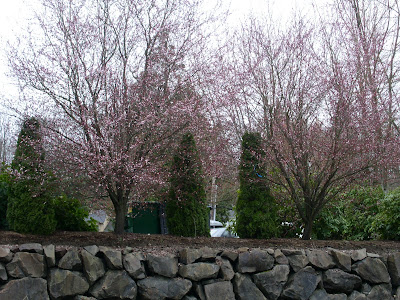 Closer into the "downtown" area of the city I live in I've noticed this wall before.  I never thought about what used to be there.  It's been cleared of any buildings and is covered with blackberry bushes now. 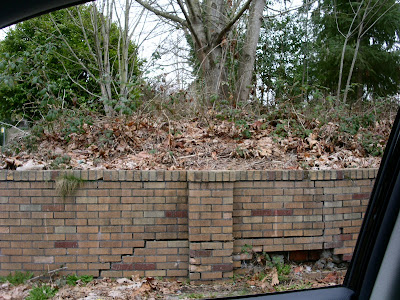 Here is a magnolia tree that I see is getting ready to bloom.  Every year I wait to see the show it puts on.  It's at a 4 way stop and people always take their time when it's blooming. 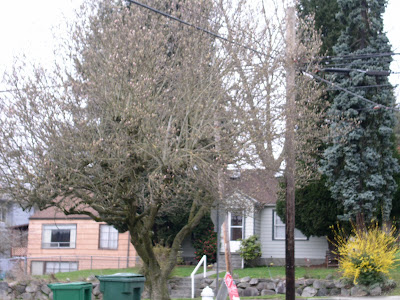 A few things I noticed but couldn't take pictures of since I was driving:
Daffodils planted in a large clump in a ditch with no houses or businesses nearby, the large fields where people grow the flowers for many farmer's markets around here, the pea patch that is empty now, the huge sod farms in the valley and the baseball fields in the middle of the valley.
I think this was such a great idea.  I'd love to see if anyone else wants to share their journey too and take the time to notice the little things.

Posted by Catherine@AGardenerinProgress at 9:43 AM