Some of the July garden

It's hard to believe we're already this far into July!  It has been a fun and busy summer, seems like there's barely been a day without something going on.   The temperatures finally warmed up in July and the watering has begun, nothing like what many of you other gardeners are going through though.  We've had quite a bit of thunder and lightening, not very usual for our summers.  It's kind of fun listening to the thunder rumbling while the doors are open.  It's also finally been warm enough to sit outside in the evenings.  Recently we heard an owl up in a tree right by us.  I knew there were owls around, but we've never heard one here.  We also found a small fire pit for the front yard and had fun roasting marshmallows and making s'mores.

Here are some pictures of what's been happening in our garden: 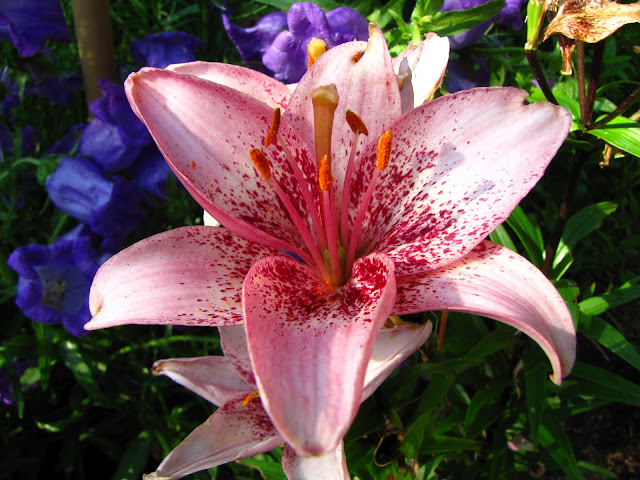 Asiatic Lilies have already bloomed, at least the ones the squirrels didn't steal the bulbs of.  This one was my favorite.  Purple Canterbury Bells are blooming behind. 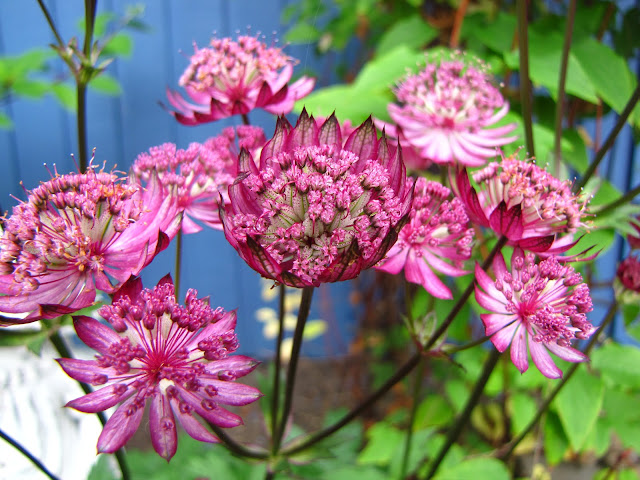 I planted several Astranias last summer, some were on a clearance table for just a couple of dollars.  They are the coolest flowers!  I found a light pink one this year to add to the garden. 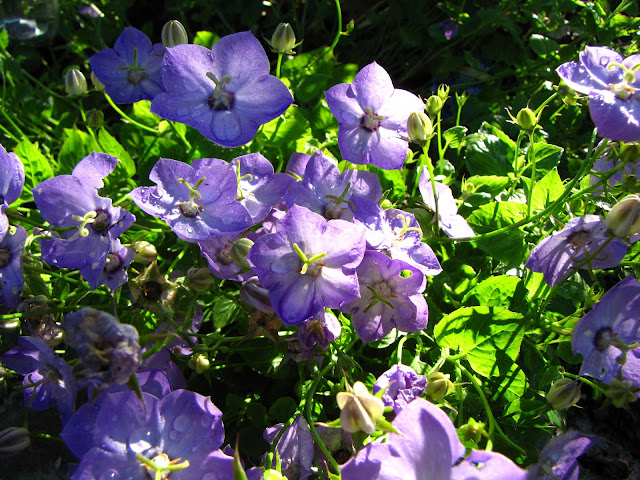 Campanula 'Samantha' is covered in flowers for months. 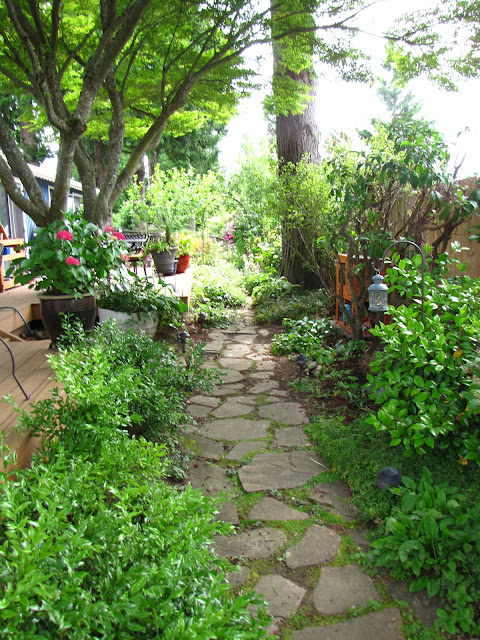 The path garden is mostly filled with green this time of year, except for the Hydrangea 'Pia' in the container on the deck. 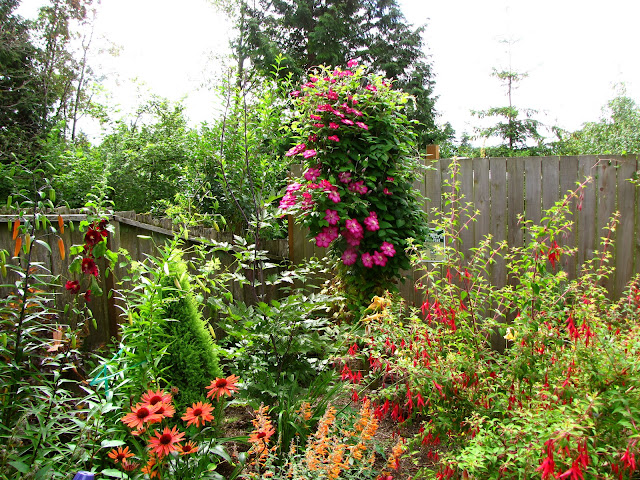 This is the back corner behind the pond.  The Clematis 'Ville de Lyon' is finally blooming.  To the left of it is a very tall Bugbane (Cimicifulga or Acataea).  It's probably close to 8 feet tall, I had no idea it would get that big. 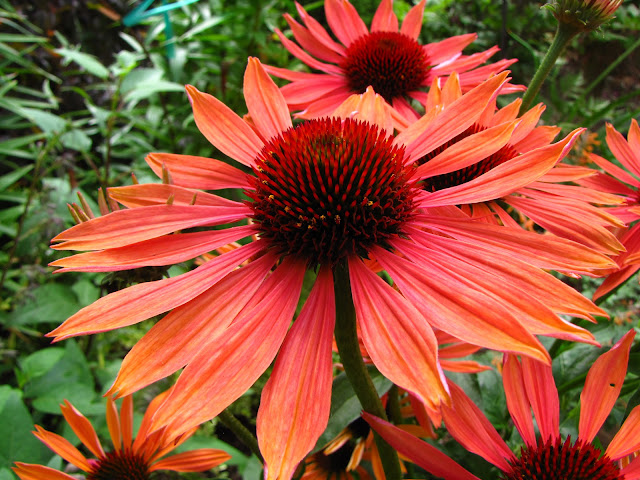 Echinacea 'Sunset' or 'Sundown', I can never keep it straight.  It has reseeded and I'm so happy to get more of these flowers! 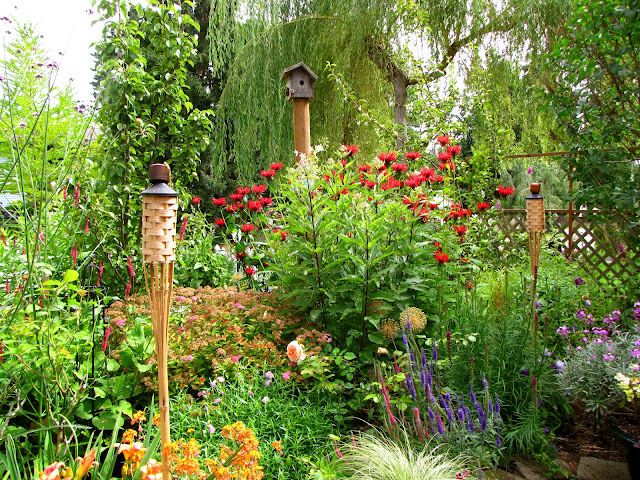 The front Butterfly garden which is more full of territorial hummingbirds than butterflies right now.  They are busy fighting over the tall Monarda 'Jacob Cline'. 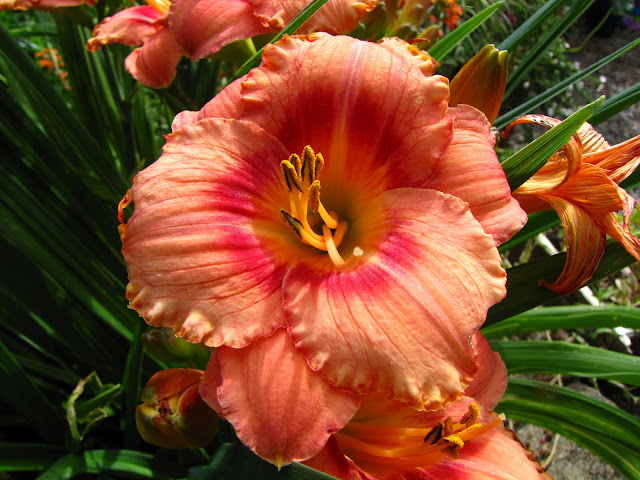 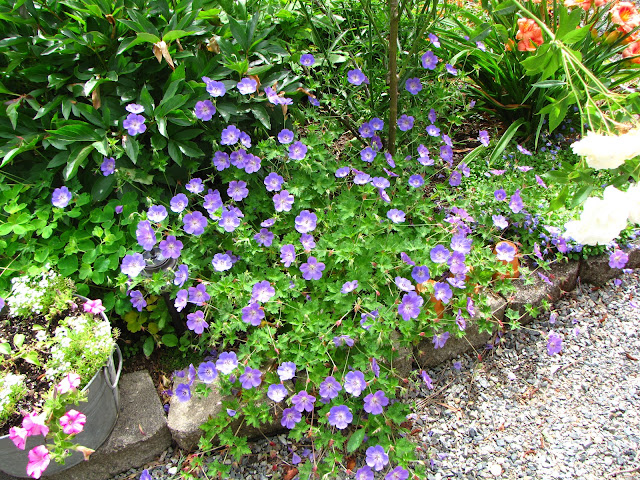 Gernaium 'Rozanne' is now my go to plant for any area that needs space filled in quickly and something that blooms for months.  I planted this as a gallon plant about a month or so ago, it's huge now!  To me it is worth every penny.  I have some climbing up in and around roses and they looks so pretty, especially the lighter pink roses. 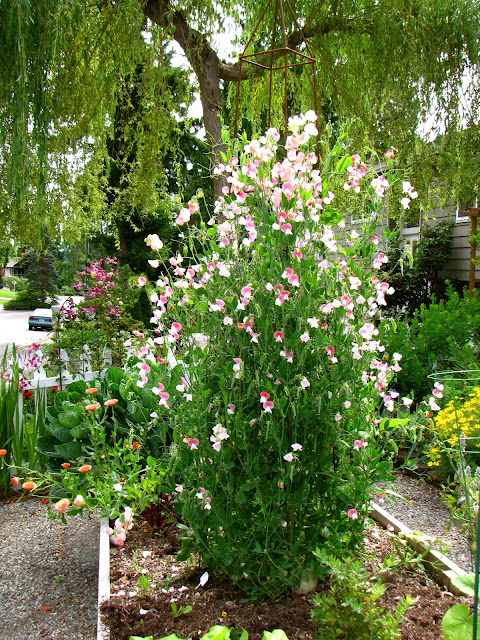 So many Sweet Peas!!  I planted them months ago and after thinking the first set of seeds rotted, I planted more.  I think both sets germinated and it's so pretty and smells delicious! 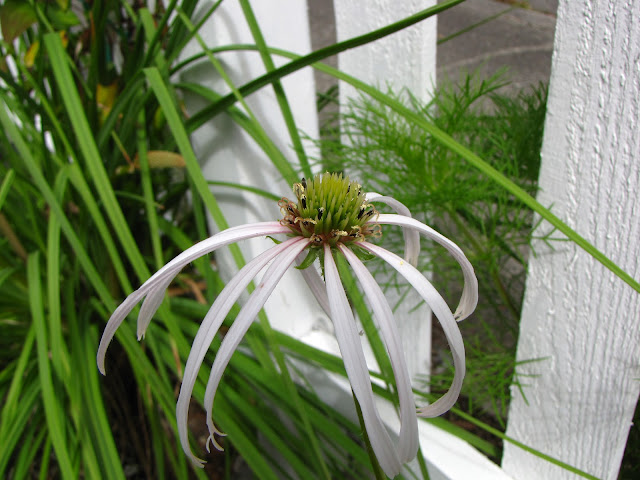 A new Echinacea 'Hula Dancer', I love the skirt. 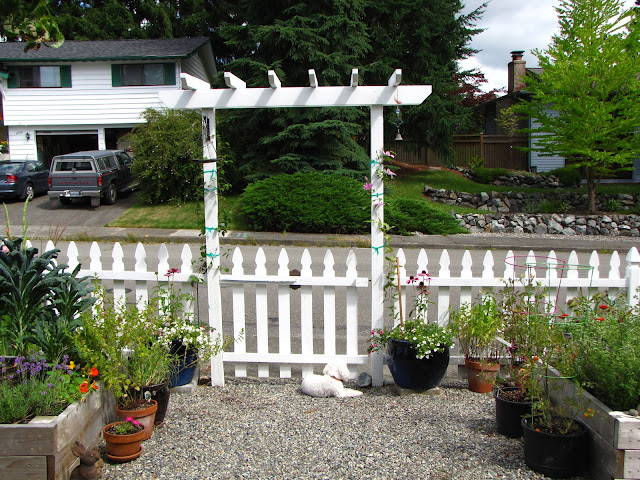 Gracie is plotting her next escape here.  Originally we had climbing roses in the blue pots on either side of the gate, they hated being there and were moved elsewhere.  I now have a Clematis in each and they are doing great.  I think they grow a few inches every night. 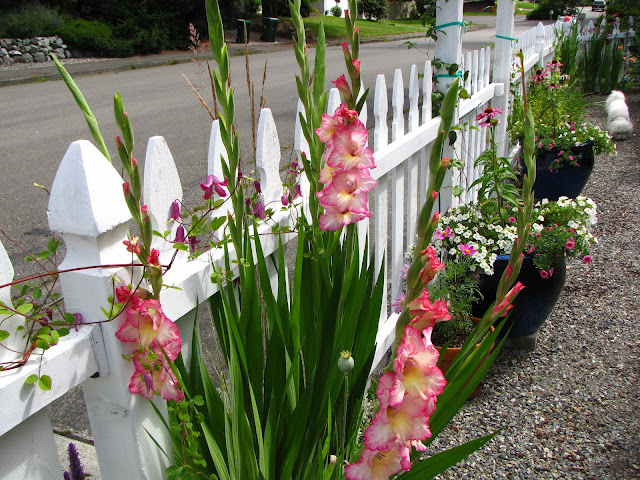 Gladiolas are starting to bloom.  The Clematis texensis on the fence has only been there one year.  It has been growing and blooming for months, I love the bell shaped flowers. 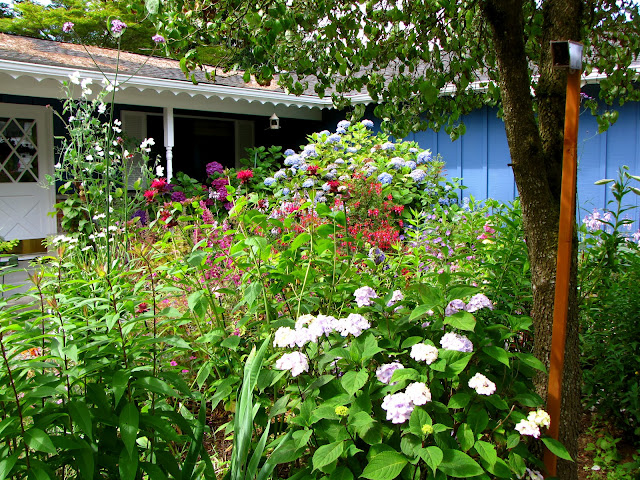 The Hydrangea 'Preziosa' that I moved last year when we did our front garden is looking the best it ever has.  It's difficult to see the flower color here, it's a light lavender that continues to age to a pinkish color.  I think it was in too much sun before and seems to love being under the Dogwood tree. 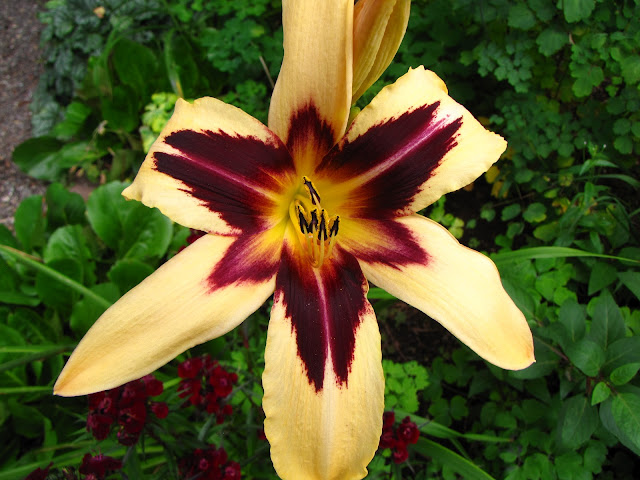 Daylily in the backyard. 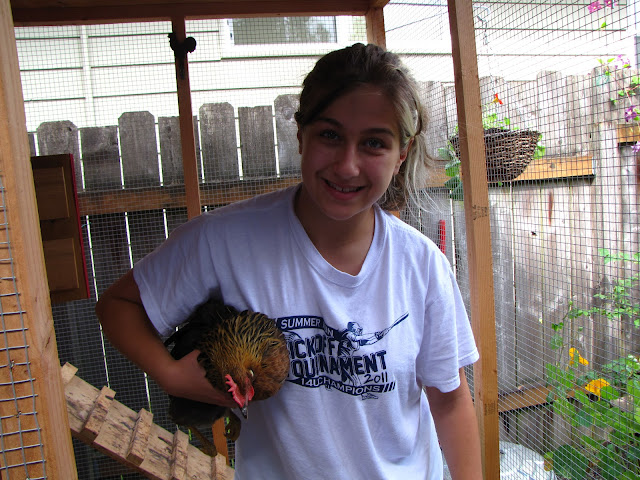 Sweet Pea with Sunny.  Sunny is a Brown Leghorn and seems to be the only chicken that doesn't mind being picked up.  She is also the one that sneaks into the blueberry bushes every time they are let out.  We are hoping we'll seem some eggs in the next couple of weeks.  They are almost 18 weeks and that is the early side of when they can start laying eggs.  As a new chicken owner I can still say they are so much fun, not much work and really one of the best pets I've ever had, and believe me we've had them all - dogs, cats, rabbits, birds, fish, hermit crabs, hamsters and gerbils.

Hope you are enjoying your summer!
All words and photos in this post are property of A Gardener in Progress.