The path in spring.

The last couple of days have been beautiful.  The birds seem to be returning, maybe they've been waiting for the sun too.  I was able to get a picture of this Spotted Towhee, at least I think that's what they are.  Let me know if I'm wrong.  There was a pair of them and when I saw them they were drying off from a dip in the birdbath. 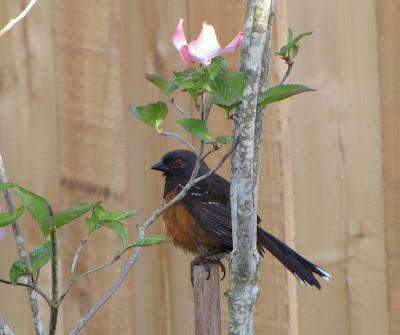 I spent most of my time weeding and cleaning the path area.  Here's a view down the path, the pond is behind where I stood to take this picture. 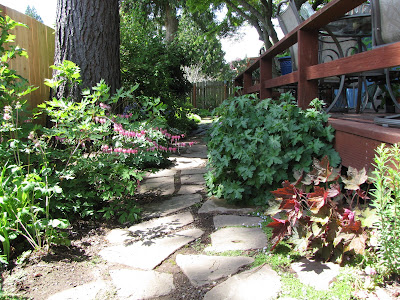 I had lots of weed, grass and for some reason Lady's Mantle (alchemilla mollis) growing in between the stones.  I have several different types of ground covers growing around them.  This is Blue Star Creeper (laurentia fluviatilis).  It will soon be covered in these pretty little pale blue flowers. 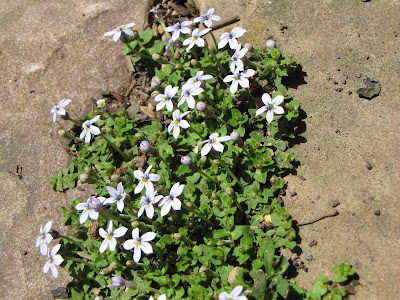 I also have it growing around the side of my pond.  It's easy to transplant and stays a nice green mat once the flowers are finished if I keep it watered.  Another ground cover growing around the stones is Corsican Mint (mentha requienii).  It looks very similar to Blue Star Creeper, but its flowers are much less noticeable.  If you step on it a chocolate mint scent is released.  Sometimes I just rub my fingers across it so I can smell it.
The plants that are growing on the right side of the path are geraniums 'Wargrave Pink'.  These all self seeded here.  They reseed everywhere, but I've let them get big here.  They will be covered with these pretty pink flowers for months. 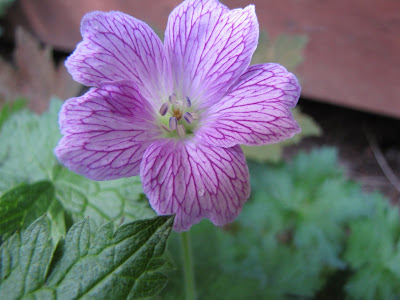 Here are a couple of Columbines  that are blooming down the path.  I found lots of babies too all over the place. 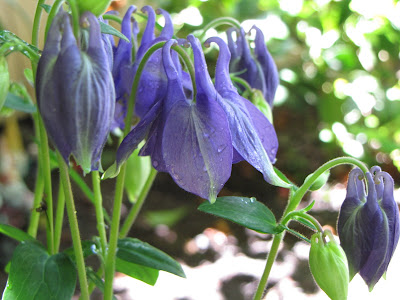 A little wet from getting watered.  They are a nice lavender color. 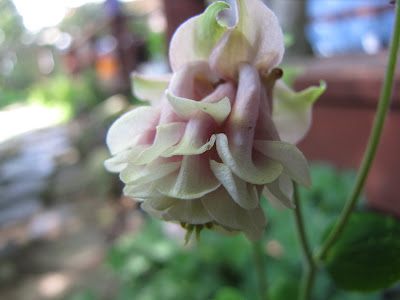 Another ruffled one, this is the palest pink.  It looks perfect for a fairy dress!
As you turn around curve at the end of the path this is the little gate that leads to the raised beds.  The ground cover here are Baby's Tears (soleirolia soleirolii).  It spreads very quickly and has no blooms.  The only downside is that I have to keep pulling it out from the flower beds nearby, but it does come out easily. 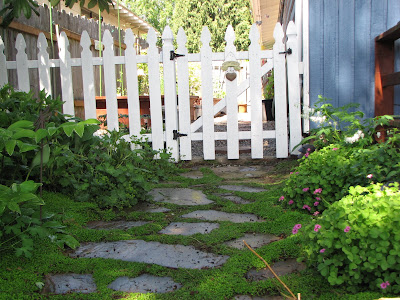 Right now the oxalis oregana is just beginning to bloom.  You can see them in the previous picture on the right. 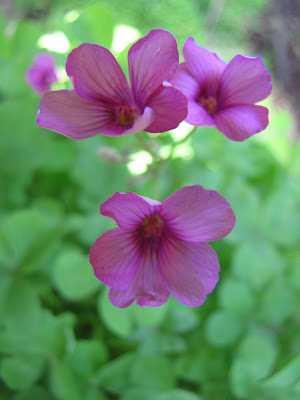 Next to them are some hardy fuchsias that I just planted, something is chewing the leaves on them.  There is also a White Bleeding Heart (dicentra spectablilis) growing there.
I spent a lot of time cleaning up the raised beds and moved a clematis 'Crimson King' to the very end to grow along the fence.
While I was out watering in the front yard two Painted Lady butterflies flew around and across the street.  I wonder if they were the ones we released a couple of days ago?
Today I plan to clean and weed the front yard and I'll share some pictures of that area.  It's supposed to be in the 70's again, perfect for gardening!

Posted by Catherine@AGardenerinProgress at 8:20 AM