This is what we call "the pathway".  This is the area that runs along our deck from the pond over to the raised beds that I showed in the post Moonscape makeover.  This area was just dirt, weeds and roots.  We knew that under the pine, cedar and large Japanese maple no grass would grow here.  I think a previous owner may have attempted to grow some since there were a few clumps here and there.  We had to bring quite a bit of fill dirt in to level the area out.  The back yard slopes down towards our back fence.  All the stepping stones were brought in by us over many trips from the rockery. 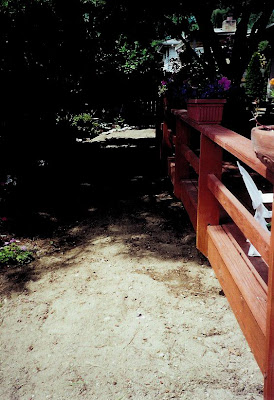 This was some pretty heavy work.  Each stone had to be fit sort of puzzle style to fit appropriately.  We had many yards of topsoil delivered as well as the fill dirt.  Many wheelbarrows full later we had filled in between all the stones.  Along the path to the left side is a large Ponderosa pine, flowering currant, hellebores, Wargrave Pink geraniums, bleeding hearts, bluebells, a large red rhododendron, camellia and tiarella.  It's pretty dry under that pine, so I do have to do extra watering in the summer.  To the right are mostly purple palace heucheras and more self seeded Wargrave Pink geraniums that seem to thrive there.  The Japanese maple is to the right as you head toward the curve of the path. 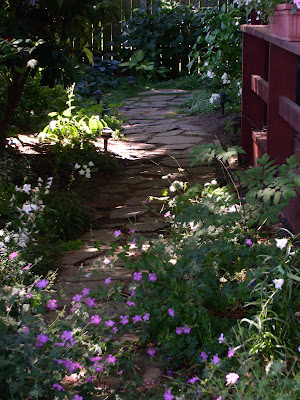 At the curve of the path to the left is a cedar tree.  Sword ferns, hellebores, hostas, huckleberry and hydrangeas all grow in a nice grouping.  They all seem to like the acidic soil that is in this area.   Just around  the curve takes you past another rhodie, this one is lavender and grows in a very unusual contorted way. 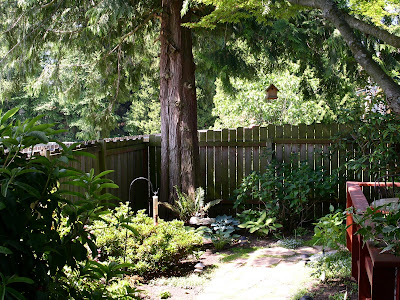 Here is another view of the path during the summer.  The blue star creeper is in bloom.  Scotch moss also grows between some of the stepping stones. 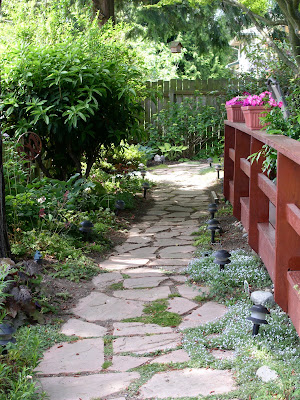 I love how the path connects the two areas.  I often stand at one end or the other of the path to get different perspectives of the garden.  This was definitely worth the hard work.  I'm trying to add more native plants now, because I would like to make it a little less work in the summer.  I'll be posting new pictures in the spring as many of the flowers in this area bloom then.
Next stop, the pond...

Posted by Catherine@AGardenerinProgress at 7:20 AM