The pond in April.

All the sun we had earlier in the week seems to have put everything around the pond into growing overdrive. I'm not sure if it's just the sight of leaves on so many plants that make them seem bigger or if they really have grown that much already since last year. The weather has been gray and rainy the last couple of days, but at least now when it's raining it's not as cold as it was, and in fact I think the plants have appreciated the water. 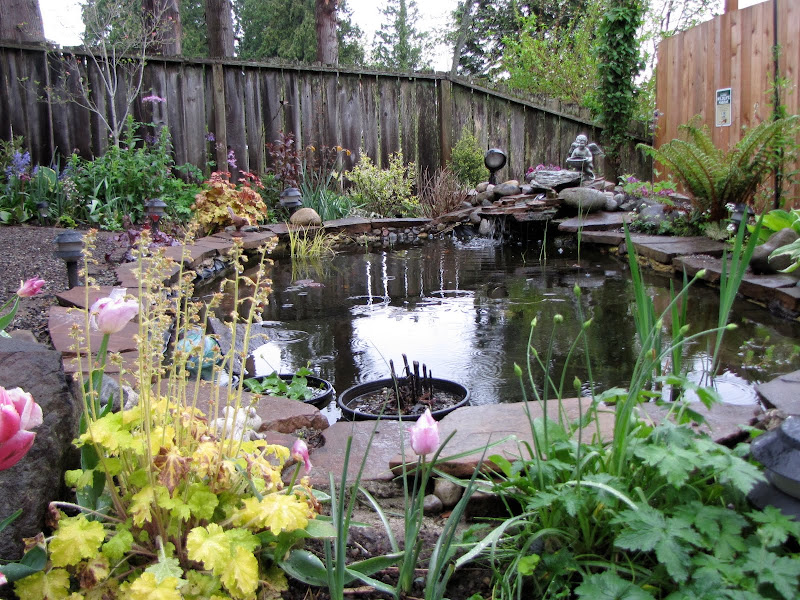 The April pond on a gray day makes everything a bit gray looking. The plants on the opposite side of the pond were almost all new or transplanted during the fall, and everything is looking great. The conifer to the right is a Juniper (Juniperus communis) 'Gold Cone'. The new growth is a yellowy/gold which looks great with the Deutzia 'Chardonnay Pearls' in front and Ninebark (Physocarpus opulifolius) Coppertina to it's left. I'm trying to stick with a color theme here. Already I'm finding myself diverting from it, but trying really hard not to. 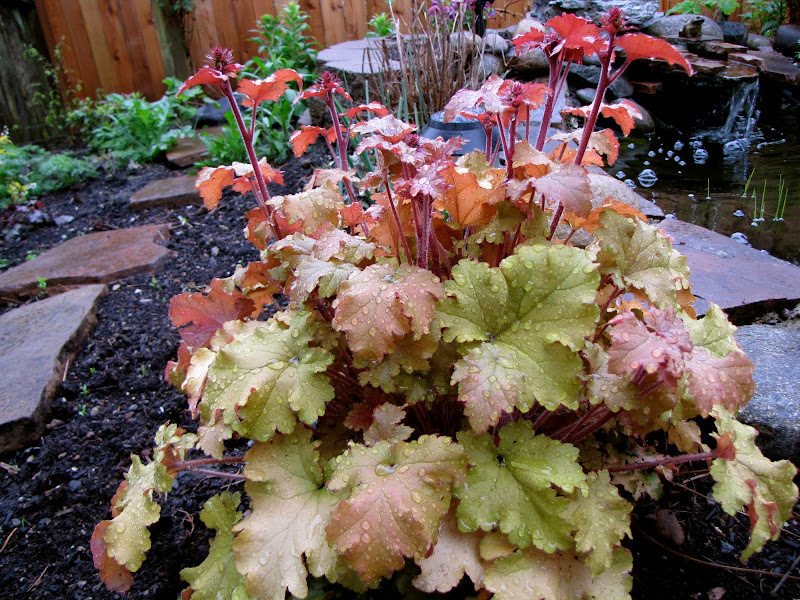 There are several Heucheras planted to the front of the plantings I mentioned above. Right now this is my very favorite, Heuchera 'Marmalade'. It has taken off growing so fast and has such nice coloring. Next to it is Japanese Blood Grass which is just starting to come up. Behind it is a Fuchsia magellanica, but it will be awhile before it really starts to do anything. 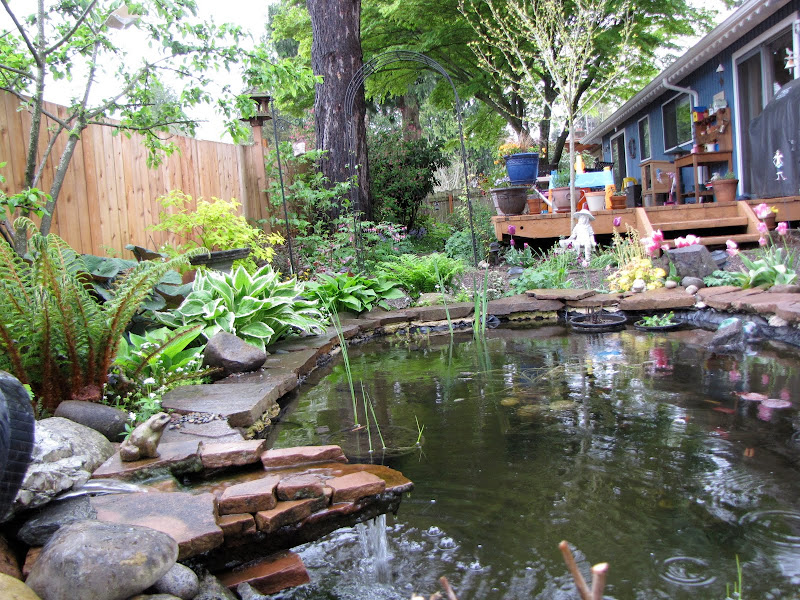 This is looking across from the opposite side of the pond from the first picture. I think the fish have been spawning, I've seen them chasing each other around like crazy. Even at 11 p.m. when I was letting the dog out I could see them chasing each other. The first time I saw it happen I thought the fish were trying to hurt one of the other fish. It wasn't until after doing some reading that I found I must have had only 1 female and 3 males. That poor fish wasn't left alone for days. Rarely have we seen the tiny babies. Many of them are eaten by the larger fish, but occasionally we see them hiding under a waterlily leaf. Each year a couple survive, last year 2 made it and now are the cutest little fish. They are white with orange and black spots which are Shubunkin markings. 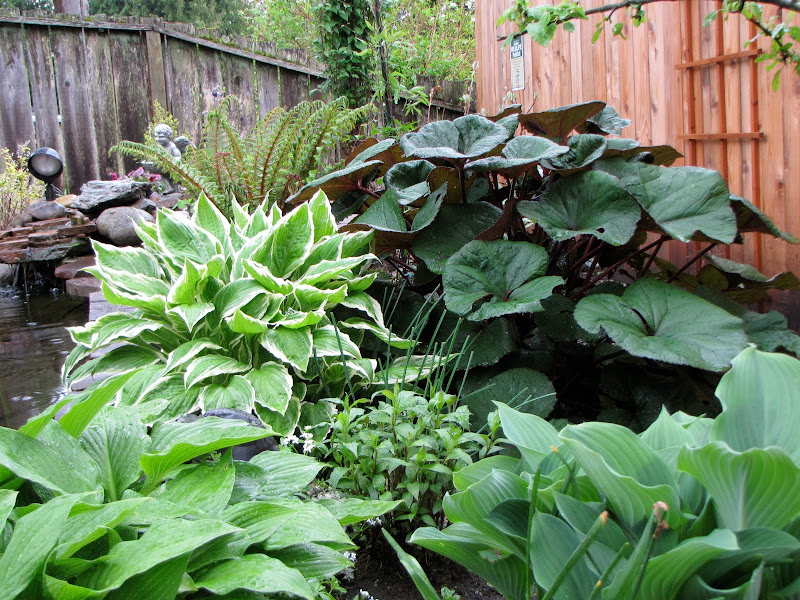 This side of the pond has a leak between the liner and the edging stone. These plants are constantly getting moisture from the leak, and even better the water has natural fish fertilizer in it. The large round leafed plant is Ligularia 'Othello', the smaller leafed plant between the Hostas is Chleone or Turtlehead. 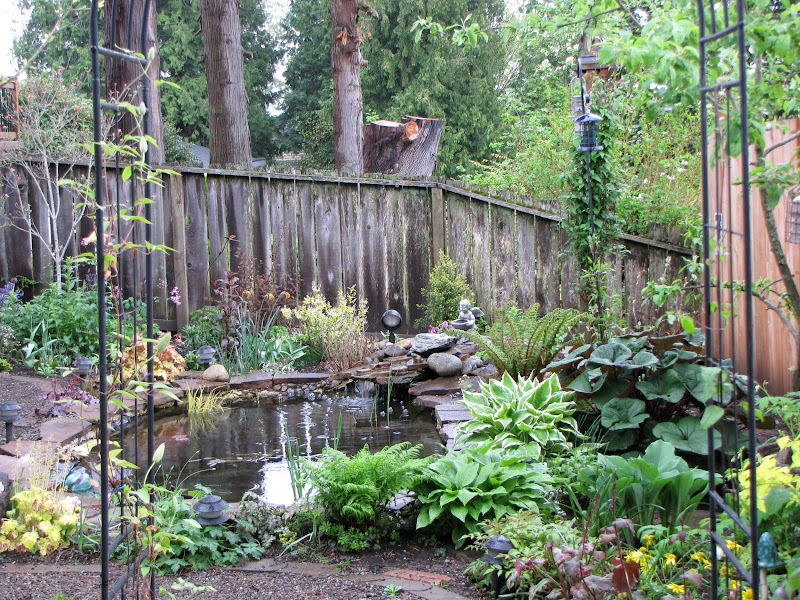 I'm still loving how the pond looks framed by the arbor I put in last year. On the left side of the arbor Clematis 'Nelly Moser' is getting very close to blooming. In the past the most I've gotten from is one bloom, then it would die to the ground. Already it seems to like this new spot. On the right Clematis 'Comtesse de Bouchard' is growing quickly too.

I plan to add Water Hyacinth and Fairy Moss (Azolla) which are both floating plants as soon as I can find them. Maybe by next month's pictures there will be waterlily buds or even flowers to share.