Something to look forward to...

Is it spring yet?  Just kidding... sort of.  After the freeze we had last week the garden doesn't have much blooming besides some cheerful Pansies and Violas.  I see lots of buds have formed on Hellebores, rhododendrons, Sarcococcas and Camellias but it will be awhile before I get to see them blooming.  It's been very rainy and the ground is too wet to do much in so I've already been going through my garden photos to remind myself of what the first blooms will be.  These spring bloomers have always been very reliable in my zone 8 garden, I would plant all of them again and if I have room I'll gladly add them to other places.
Here are some of the first flowers that will be blooming in early spring: 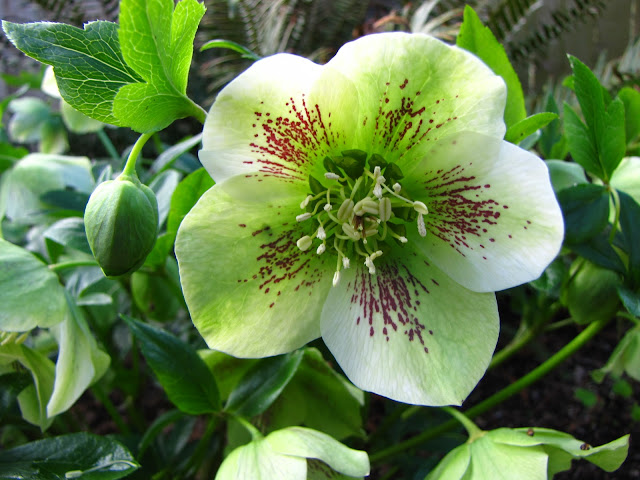 Hellebores (H. orientalis) are usually the first to bloom and can be blooming as early as January.  Last year I added a double and am very excited to see how it looks this spring.  I've already made room for another double in the entry garden.  Hellebores can get very pricey, but the good thing about them is that they reseed freely and will give you lots of babies to move or share, they don't usually look like the parent plant though.  The flower buds come up from the ground in late winter and seeing those buds are one of my favorite discoveries in the winter. 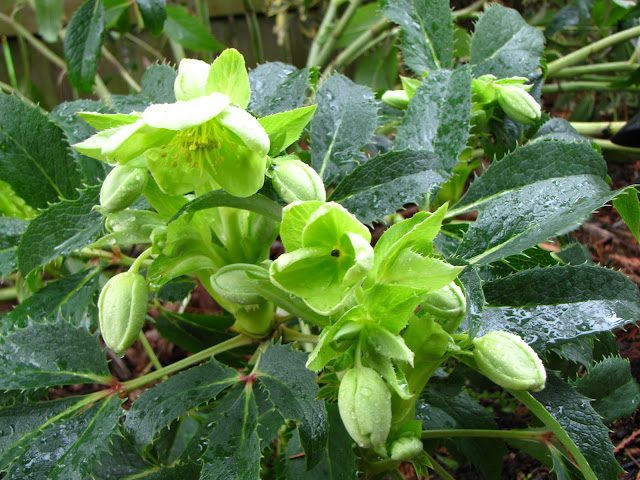 Corsican Hellebore (H. argutifolius) blooms a little later than the ones above.  They also bloom on the end of the flower stems, they already have set quite a few buds.  This was a seedling from a friend and has already started reseeding in my garden.  This type can handle quite a bit more sun and gets to be about 2 feet high and 2 to 3 feet wide. 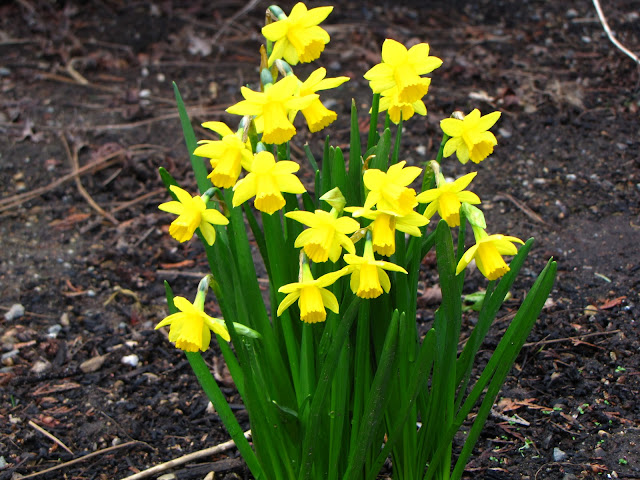 Tete-a-tete daffodils seem to be much easier for me than the larger daffodils.  These have been multiplying like crazy over the last few years.  I love how they look popping up from the snow, the yellow seems extra bright then. 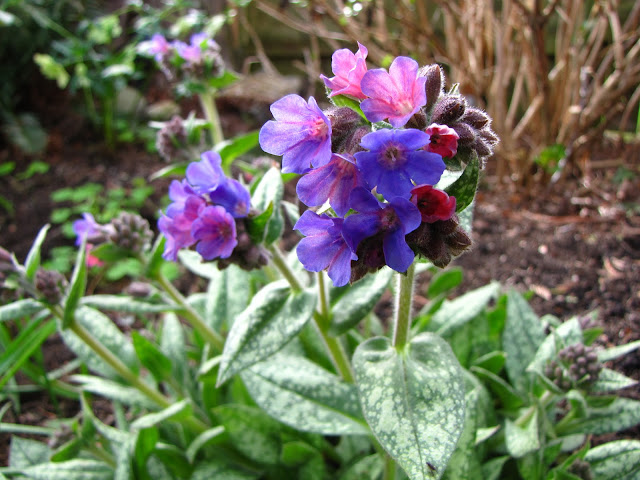 Pulmonaria is another favorite.  It starts blooming very late in winter and then continues to bloom for several months.  This is another that will reseed which is great because they tend to be a little expensive too at most nurseries. 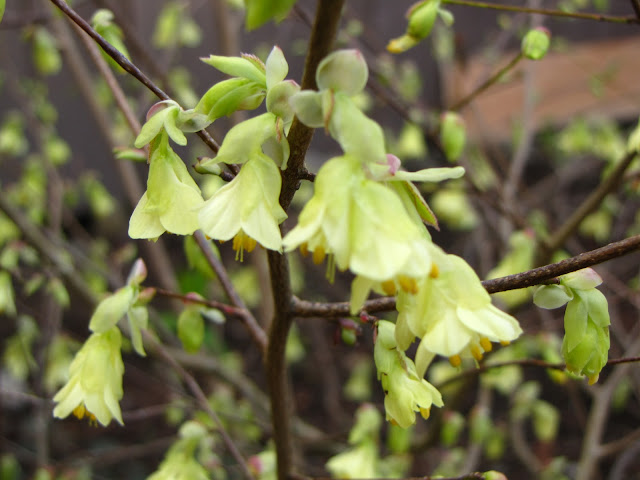 Winter Hazel (Corylopsis) 'Buttercup' has the sweetest flowers.  They are hard to photograph with my camera because of how light they are.  The whole shrub is covered in the dainty yellow flowers, then it leafs out after.  It's very slow growing, which is good since it probably doesn't have much growing space where it is. 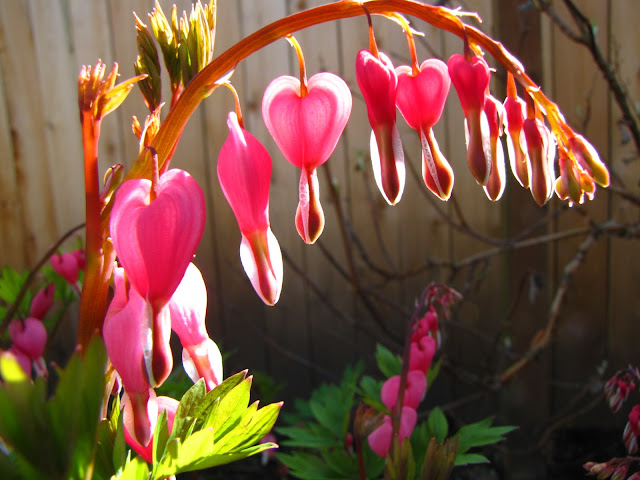 Old Fashioned Bleeding Hearts (Dicentra spectabilis) is another flower I look forward to seeing.  It seems to start showing signs of life in late winter and once it starts coming up it grows quickly.  These remind me of my mom because when I was living in an apartment and didn't have a garden I asked her to plant one in her garden so I could see what they looked like.  I had only seen the name and was dying to know what the flower would look like.  Of course under my mom's green thumb it grew larger than any of mine have ever dreamed of growing.  I also grow the 'Alba' variety which is pure white and just beautiful. 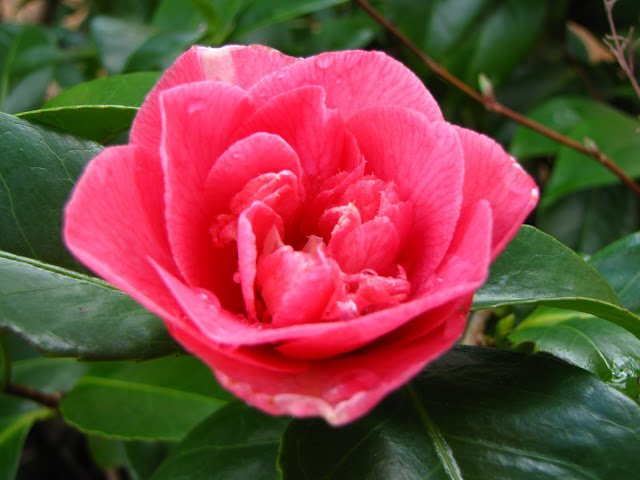 Camellia japonicas are early spring bloomers in my yard.  I see them blooming a month or so earlier in other gardens, I think it must have to do with the amount of sun mine get.  I know not everyone is a fan of Camellias, but they do well in my garden and I appreciate their evergreen leaves as well as the pretty flowers. 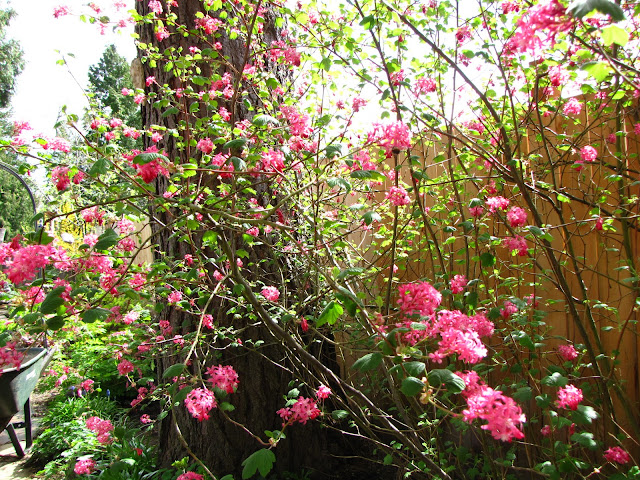 Pink Flowering Currant (Ribes sanguineum) is not only my favorite spring blooming shrub but also the hummingbirds who fight over it.  It took a few years to really get settled in under the pine tree, but now it is loaded in flowers every March.
A few other late winter/early spring blooms are Sarcococcas, Water Hawthorn (which grows in the pond), Tulips and Crocuses.
What are some of your favorite early spring bloomers?