The pond in May.

I was hoping to get out in the garden during my couple of hours of free time today, but the rain returned.  Instead I decided to take some pictures of the pond, since I don't think I have recently.  The colors are so rich out there even with the rainy skies.  Everything is looking so lush and it seems that even without much blooming it still looks really pretty. 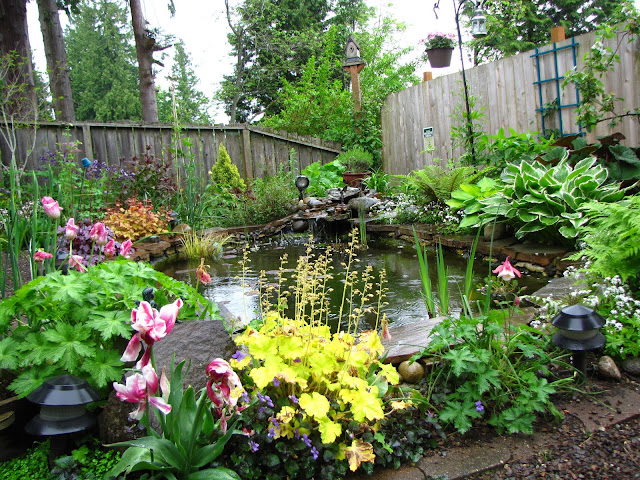 Hostas, heucheras and ferns are just some of what is looking good right now.  I've realized that my backyard seems to be at it's best in the spring, while once June arrives the front yard takes over in being my favorite part of the yard.  I've tried really hard to make the back yard lower maintenance and focus more on foliage rather than flowers. 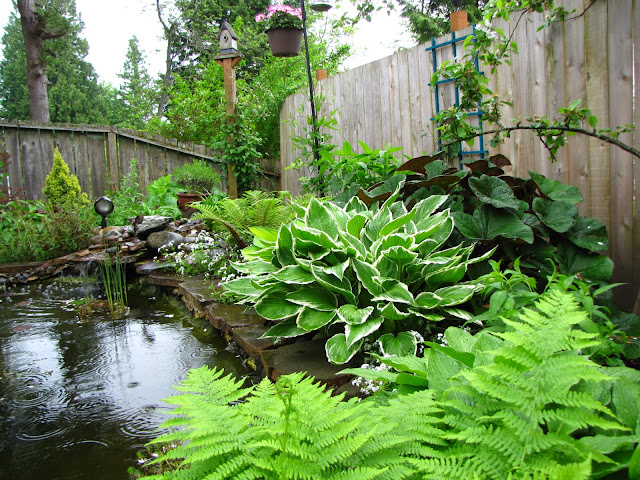 The Ligularia 'Othello' (behind the Hostas) has finally gotten too big for the slugs to destroy. 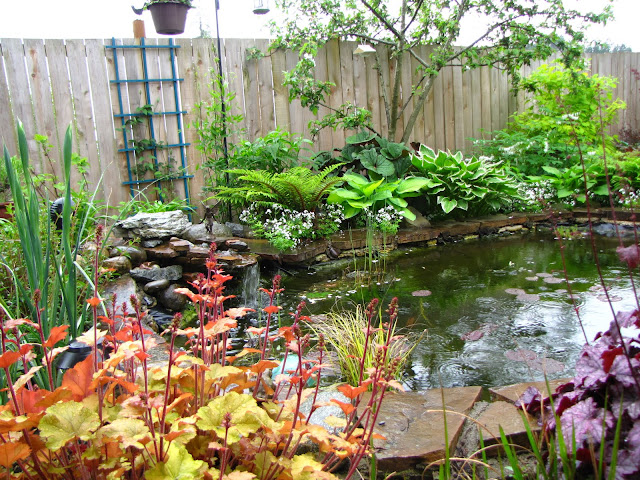 The ground cover with small white flowers is Sweet Woodruff.  It has spread like crazy around the back of the pond.  It's pretty easy to pull up in places I don't want it, but right now it looks so nice covered in those tiny white flowers that I just leave it alone. 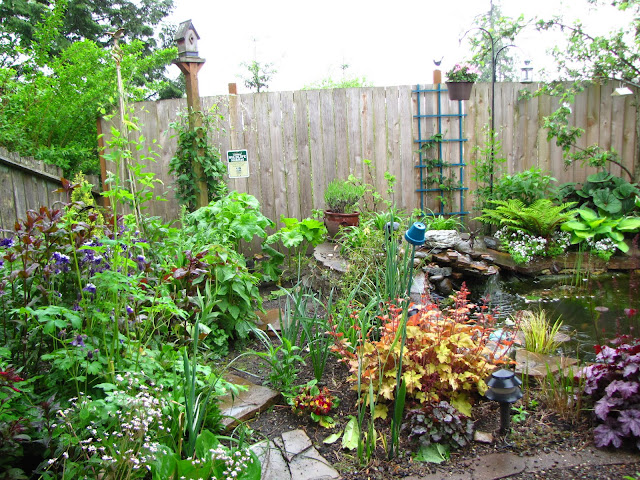 To the left of the pond it's beginning to look like a jungle.  There are several shrubs along the back - Hydrangea 'Limelight',  Ninebark 'Coppertina' an American Beautyberry 'Profusion' and more.  In front of them are Daylilies, Coneflowers, Oriental Lilies, Penstemon, Hollyhocks and lots more. 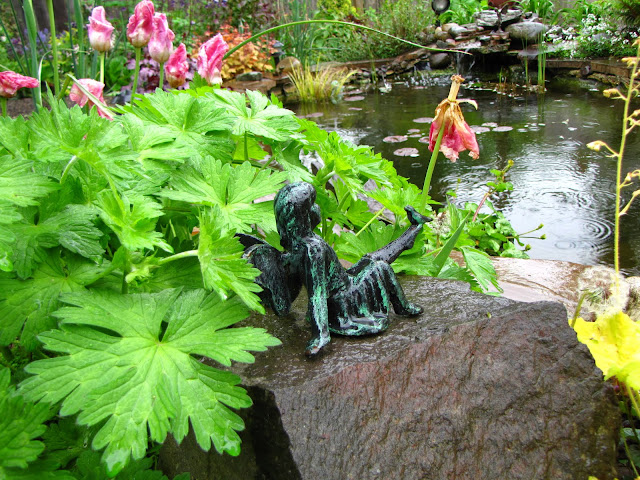 A fairy waiting for Geranium 'Rozanne' to bloom. 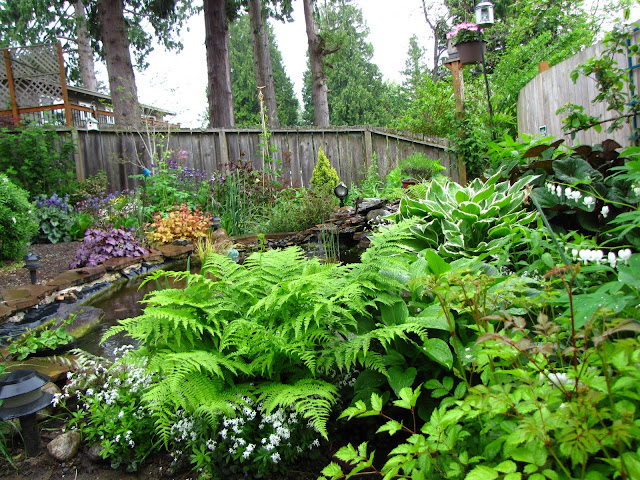 Astillbes are getting huge and have lots of buds on them.  Lots of purple Columbines are blooming across the pond. 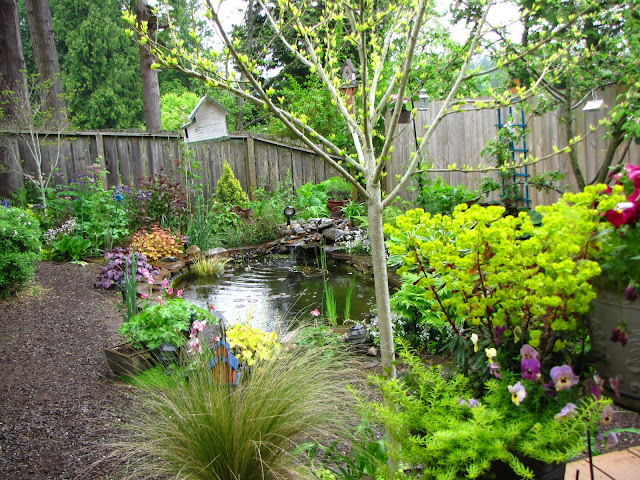 This is the view from the deck just outside our family room. 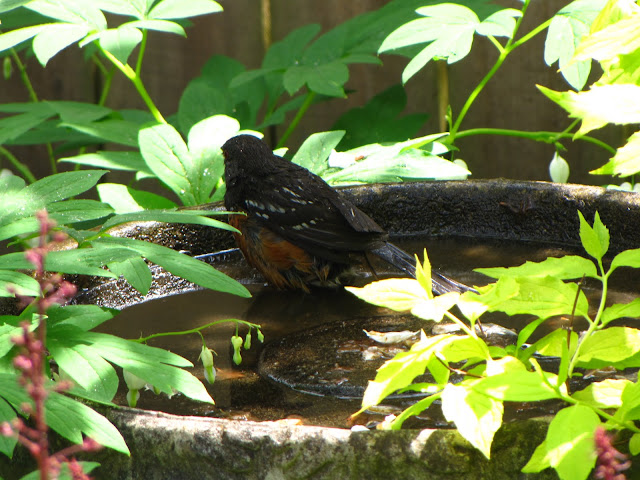 Not the greatest picture, but I wanted to show one of the Spotted Towhees that hangs out regularly in the birdbath under the apple tree next to the pond.  Right now you can hardly see the birdbath because the plants around it are so big.  This pair of Towhees must be nesting nearby, at least one of them is in the yard most of the day.  They had splashed most of the water out, so I guess the good side of the rain is that it will get refilled.
I noticed that the two pairs of Chickadees that had been working on nests in birdhouses, one being the one behind the pond, haven't returned for a couple of weeks.  It seems like this crazy spring weather finally made them change their minds.  This is only the second year in the 12 years we lived here that there aren't any birds nesting in our yard which is disappointing.
I know many people are having terrible storms and tornadoes to deal with right now.  I hope everyone is staying safe.  Let's hope that this strange spring will soon be on it's way so we can enjoy being outside again.
All words and photos in this post are property of A Gardener in Progress.