Sometimes the amount of work there is to do seems so easy and like it won't take too long, but then reality sets in and before you know it you're in the dark.
There was not a minute of free time for us this weekend.  We all woke up early to watch Sweet Pea's team play their last basketball game of the season.  Her 7th grade team beat an 8th grade team by 11 points and she played great, a fun way to start the day for sure.  As we drove up to the house we saw a dump truck parked and waiting for us to dump the soil we ordered. 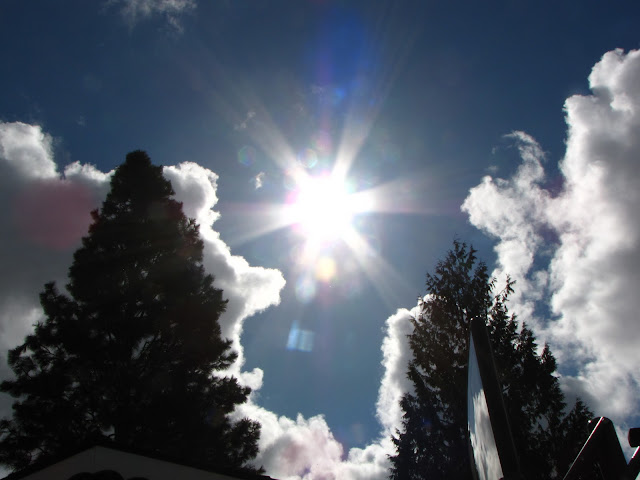 Luckily this is what the sky looked like when we drove up and stayed pretty much that way all weekend. 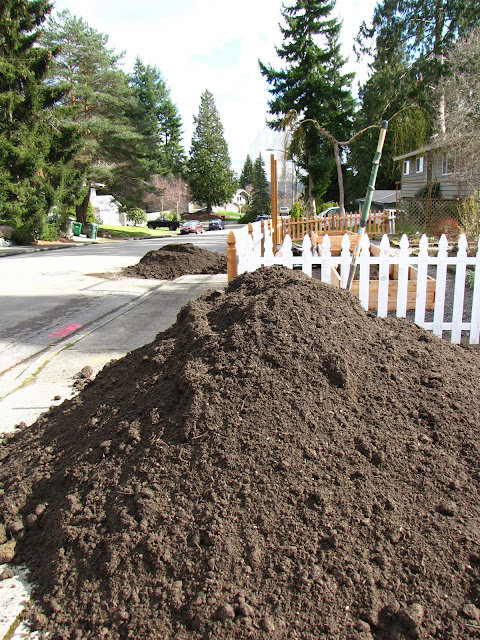 Here are the 8 yards of soil we ordered.  It smelled so good!  Nothing like the smell of good soil.  Those piles didn't seem so bad at first, but after 2 days of shoveling it seemed like it would never end.  And when it was dark and we were still shoveling it on Sunday I didn't care how good it smelled anymore either, I just wanted it gone.  And it had to be finished since it was blocking my car in the garage. 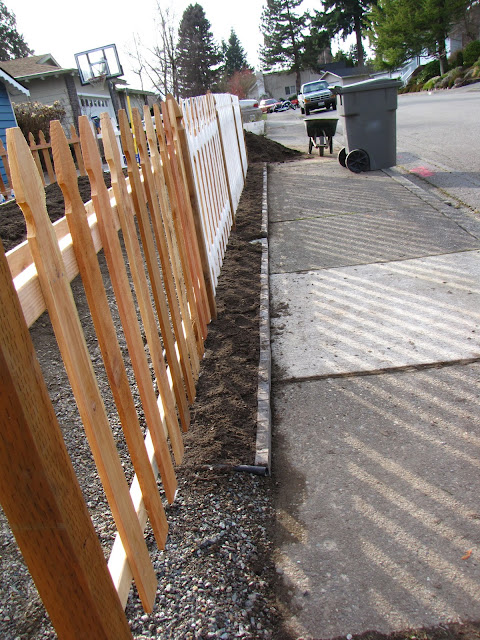 One of the jobs my husband did was to put these edgers in along the driveway and sidewalk.  One reason was to make the edge look nicer and the other was to raise the soil a few inches.  I really like how it looks. 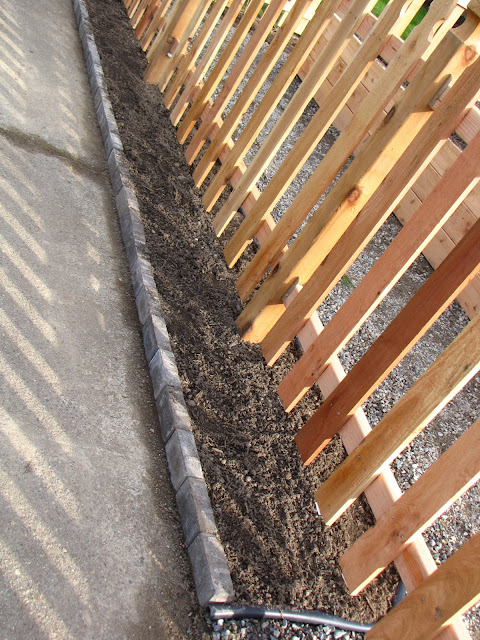 The soil underneath is mostly clay so the extra depth will hopefully allow to mix the good soil in some when planting new plants. 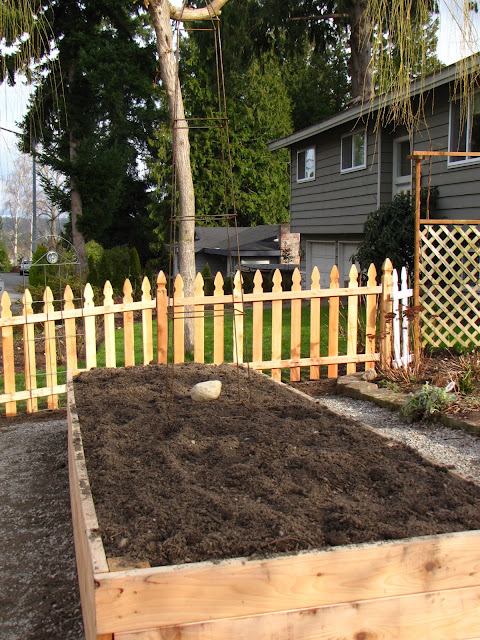 The smaller bed was filled by the end of Saturday.  I plan to grow Scarlet Runner Beans on the trellis.  On the trellis by the fence I moved over a Clematis that had been in the front bed. 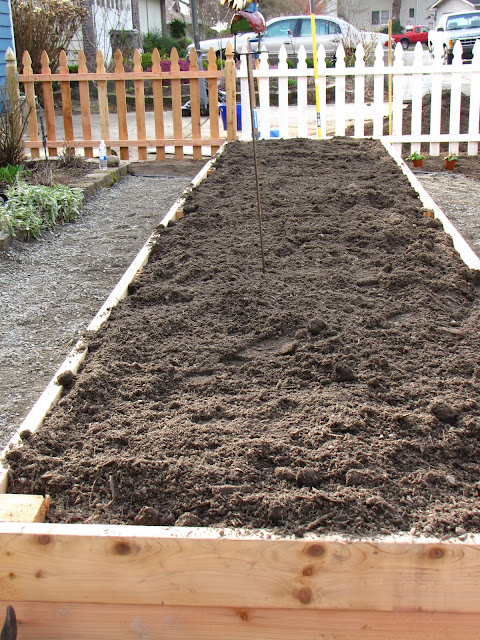 We ran into some problems with the larger bed which took time we weren't planning on.  My husband had reinforced several places along side the beds, but it still bowed out a bit when it was filled.  We had to dig out soil along the edge and then reinforce it even more.  This was filled by the middle of Sunday. 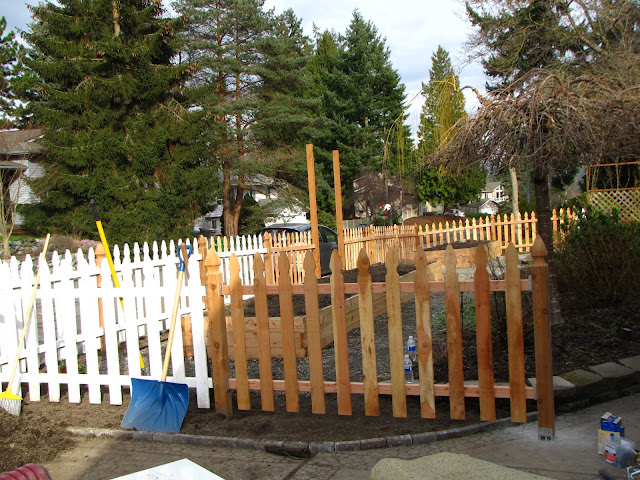 The last panel was put in place!  We ran out of time to finish the gates, hopefully in a couple of weeks we'll have a few hours to finish that and the arbor.  Then all that is left will be to paint the fence white. 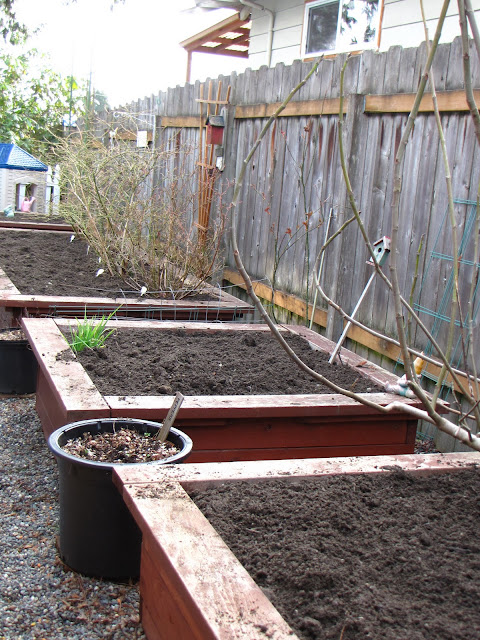 While my husband worked on drilling holes in the concrete to set the last two posts, I started  filling up the raised beds on our side yard.  The only mistake we ever made over here was using pea gravel around the beds rather than crushed.  It's impossible to wheel anything over pea gravel so all the soil had to be carried in using large tubs.  That was quite the workout since all four beds needed a good 6 inches or more of soil.  All I kept thinking about as I carried the tubs was that I won't feel guilty eating lots of chocolate tonight! 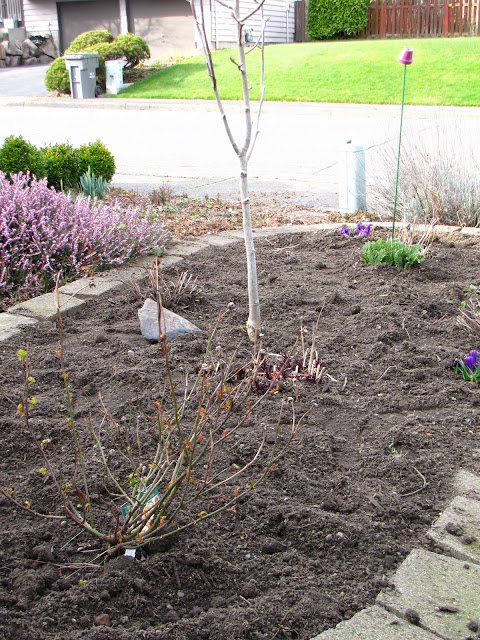 All the beds in the front yard got a nice new layer of this good garden soil, which has quite a bit of compost mixed in.  It was dark when we finished so I don't have pictures of the finished beds.  Tomorrow is the last dry day predicted so I need to go and unbury all the plants that had soil dumped on them in the dark.  What a relief to have that done!
I was hoping we'd get the gates up this weekend but we ran out of time and daylight.  I'm still very proud and excited about what we got accomplished.  Now at least I can get planting!
Luckily the girls both got to do something fun while we did the hard work.  Sweet Pea went to see "Gnomeo and Juliet" with her friend and the Littlest Gardener went to my parents home.  When my Mom brought her back home she brought us homemade meatball sandwiches and apple crisp.  What a great way to finish the weekend!
All words and photos in this post are property of A Gardener in Progress.