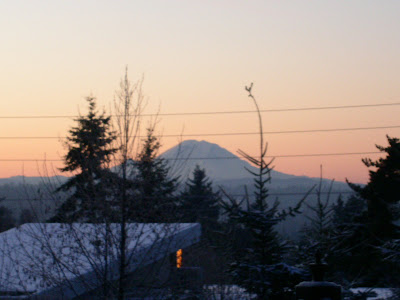 Several years ago, the school behind us moved some of their portable classrooms, and took down a few dangerous trees.  When that happened we discovered something.  We now had a view.  And not just any view, but one of Mt. Rainier.  This gorgeous mountain is almost a trademark for Washington state.  We see it's image on everything, including for a time a beer named after it.
Many mornings I stand and look at the beautiful colors around it as the sun rises.  This morning was one of the most clear views we've had for awhile.
Mt. Rainier is a sort of active volcano.  The last time it erupted was  somewhere between 1820-1894.  It is pretty well accepted that it will erupt again sometime in the future.  It's about 500,000 years old, 14,410 feet high and located about 54 miles south east of Seattle.
Mt. Rainier is known for many things, climbing, recreation and it's fields of wildflowers.   July through August is the peak time to see them in bloom.  We've been there once during the spring and I think it was a bit early to really see the flowers in their glory.  I'm hoping we can try this summer.  It's a rather long and nerve wracking drive up there.  Beautiful yes, but those mountain roads make me nervous!!  I learned some of this information from the National Park Services website.
The top photo is the actual view, the bottom one is telephoto.
As you can also see, the school replanted some new trees, and I think one day our view won't be as nice.  We'll just have to enjoy it for as long as we can, or add a second story.  Hey I think I like that idea! 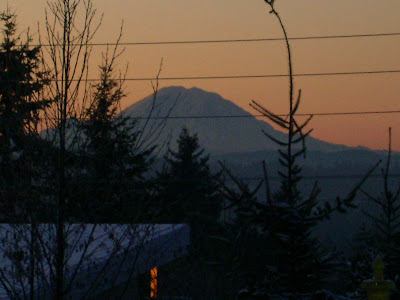 Posted by Catherine@AGardenerinProgress at 7:41 AM