As I watched the news this morning and saw how much snow places like New York has gotten, I almost feel guilty admitting that I've gotten quite a bit of gardening done in the last week.  Aside from me complaining about the rain during the winter, which we have had a lot of, when we do get a break it's usually mild enough to go outside.  Parts of the yard are too wet to do a lot with, but still other areas can be weeded (ever growing weeds, a downside to a mild winter) and there are plenty of perennials that need cutting back.
Today I did a little more winter sowing:  Foxglove 'Apricot Faerie Queen', Blue Flax, Nicotiana sylvestris and Cleome 'Rose Queen'.   Some of the seeds that were winter sown on January 10th are already sprouting.  Both Hollyhock and Lupine had germinated by January 22nd.  Now the fun of checking on the rest of the seeds starts just waiting to see which ones will be next.  Every time I lift the lids it's like opening a present and wondering what will be inside. 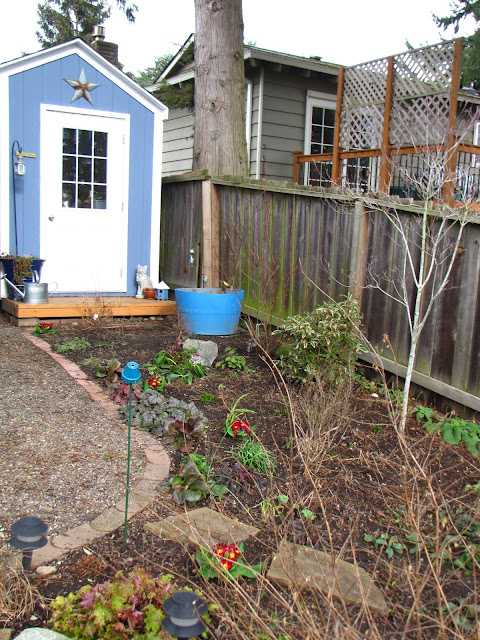 Last spring I finally got the shed (or Bothy thanks to Edith Hope for teaching me something new) that I had been wishing for.  I call this part of the garden the "shed garden" (creative aren't I?).  I finally got some Primroses in which has brightened the area up.  Daffodils, Tulips and Bluebells are all poking through.  Having a shed to work in during the winter has been really nice.  I finally have a place to store my tools, seeds and other gardening equipment.  The lawnmower wasn't allowed in and sits with a tarp over it behind the shed.  Maybe it will break for good from sitting outside and then the grass will have to be all be taken out. 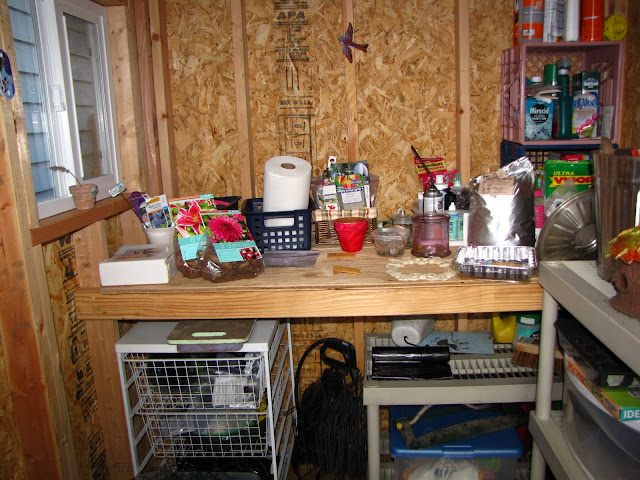 I plan to hang at least one narrow shelf above the work bench so I have some space to put all the seeds, bulbs, etc.  A lot of this used to sit inside the house piling up on desks and tables all winter.  I love coming out and sorting through seeds or finding tools that are nice and dry rather than them sitting out on the potting bench getting wet and rusty.  One day I'd love to have electricity in here so I can set up grow lights for indoor seed starting. 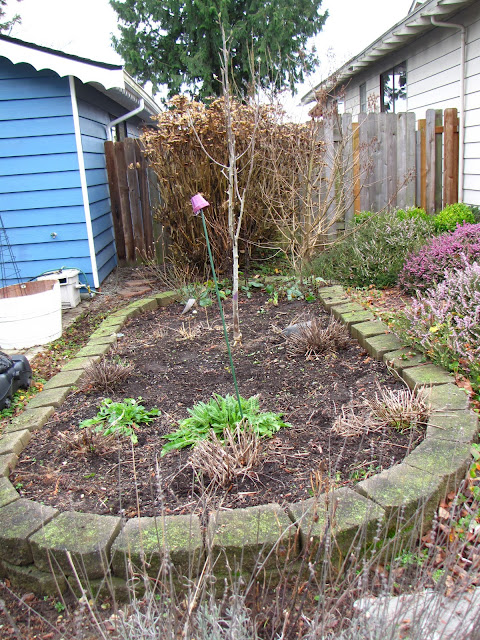 The "driveway garden" was where I focused my energy yesterday cutting back perennials, weeding and cleaning out leaves.  My neighbor laughed and said, "Are you out here already?"  Then she came back with a large bag of coffee grounds she had picked up at a Starbucks for me to use around some plants.  Today I went back out to the "driveway garden" to sprinkle in the seeds of Breadseed Poppies ('Hungarian Blue' and 'Imperial Pink') and my favorite Larkspur 'Shades of Blue'. 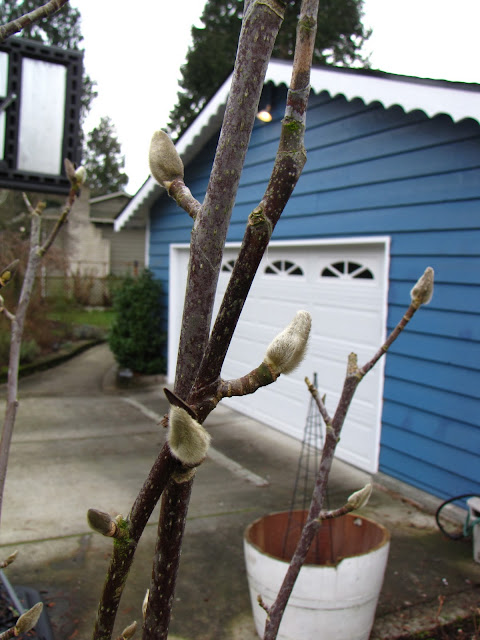 As well as finding Phlox already starting to come up I saw that the buds on the Magnolia tree 'Vulcan' getting plumper.  I'm a bit nervous about the buds getting damaged in freezing weather which I'm sure we'll get again this winter, but for now it was nice to see since it's only been here and couple of years and hasn't bloomed yet.
Yesterday I made a visit to the nursery to pick up a Sarcococca for the entry garden, while I was there a women that works there told me that many of the roses were already in.   Bare root trees and blueberry bushes were there as well, it's hard to believe it's almost that time again.