June end of the month view.

It's hard to believe June is already over and we're moving into July tomorrow.  It's starting to feel closer to summer, but still we're below in temperatures with many days still just in the 60's and overcast skies.  After reading many blogs from all  over it sounds as if many of us are having either very hot and dry conditions or cooler and wetter than usual.  Many people jokingly say that Summer does not begin in the Pacific Northwest until July 5th, and this year I think many of us are hoping that's true.
The sun broke through the clouds for awhile yesterday so I went out to take some pictures of the entry bed that has been my end of the month view since last September.  Doing this has really helped me look at this bed in a different way and trying to keep year (or most of the year) round interest. 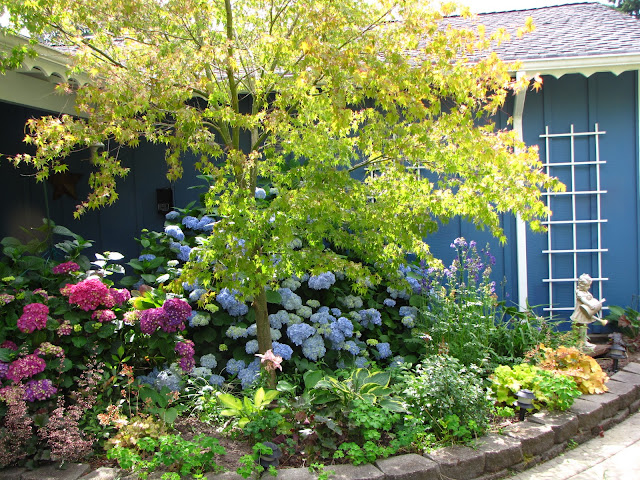 It's hard for this area not to look good with those huge Hydrangeas blooming!  I haven't done much in here recently, aside for pull some dirt away from the brick along the side of the garage wall.  I did remove some Bleeding Hearts that had started taking over, but I'm sure they'll be back in the Spring since I did leave most of the roots.  There seem to always be some volunteer Bleeding Hearts coming up in this bed. 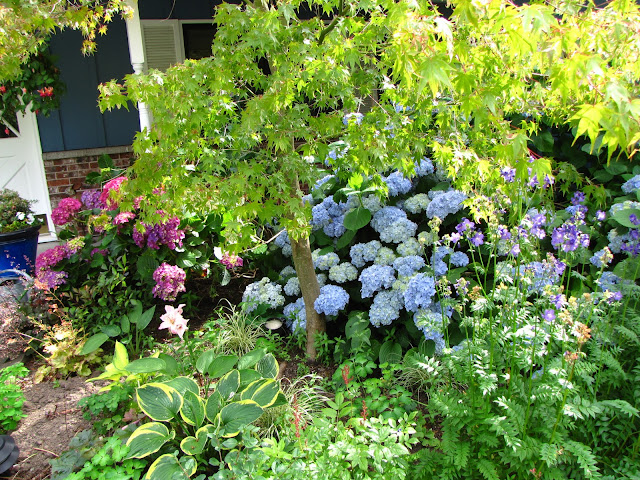 Every year I mean to move the one pink Asiatic lily here, and then I forget.  Hostas and Astillbes are beginning to bloom.  Jacob's Ladder (Polemonium) is still blooming and the scent seems to have gotten stronger. 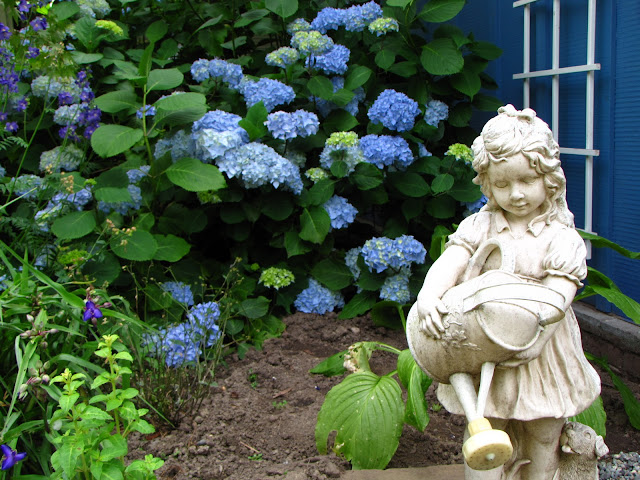 Hydrangea 'Nikko Blue' blooming behind my little girl.  She used to be a fountain, but doesn't work anymore, too cute to just get rid of.  My Mom gave me a division of a big Hosta that I've just planted behind her.  I think it should fill in really nicely here.  The plant to the left is a hardy Fuchsia that should be blooming in the next couple of weeks, although they all seem behind right now.
The end of the month view was started by Helen of the The Patient Gardener's Weblog.  Visit her to see her beautiful garden and who else is joining in.

Posted by Catherine@AGardenerinProgress at 9:10 AM
Labels: End of month view