The July pond - a little clean up.

Even with the heat we had this weekend I did manage to get some work done around the pond.  I had allowed the Larkspur (which I love) to kind of take over and grow over everything.  I kept going out to "thin" them a bit but when I saw the flowers covered in bees I felt guilty taking their flowers away.  The flowers though had gotten to the point that they were not looking as good and were definitely blocking sun and water from the smaller plants I had put in last fall.  It was time for them to get a chance to grow. 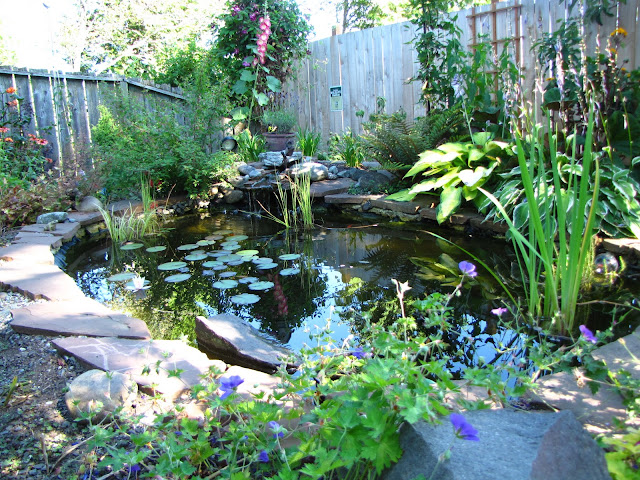 Compared to most years we have far fewer lily pads and flowers.  Other than that everything else in and around the pond is looking good with the dry warm weather we've had. 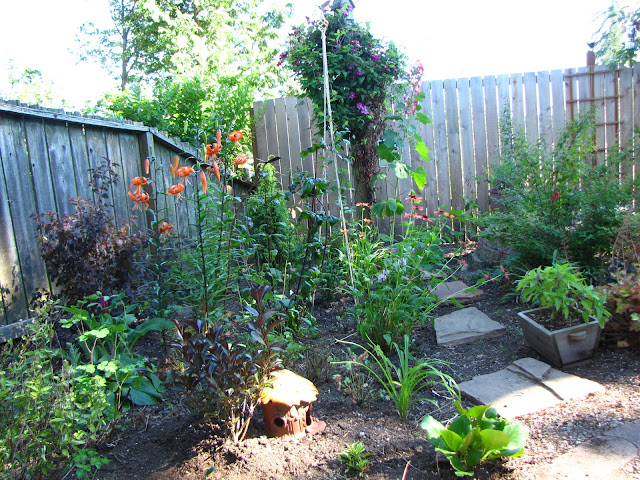 This is the side that I pulled up the Larkspur.  Many of these plants were new last fall or early this spring.  I've been trying to make this area more low maintenance because the front yard does take a lot of time with weeding, deadheading, staking, watering, etc.  I've been adding more shrubs and trying to add more evergreen plants as well.  Hopefully in a couple of years the Ninebark (Physocarpus) 'Coppertina', the new Hydrangea 'Limelight', Juniper 'Gold Cone', Azalea and Beautyberry (Callicarpa) will fill in more.  Not seen in this picture but behind where I was standing is a Flowering Currant (Ribes sanguineum), Azalea and a variegated Rhododendron.  In the sunnier spots are Cape Fuchsia (Phygelius), Echinacea, Penstemon and Daylilies. 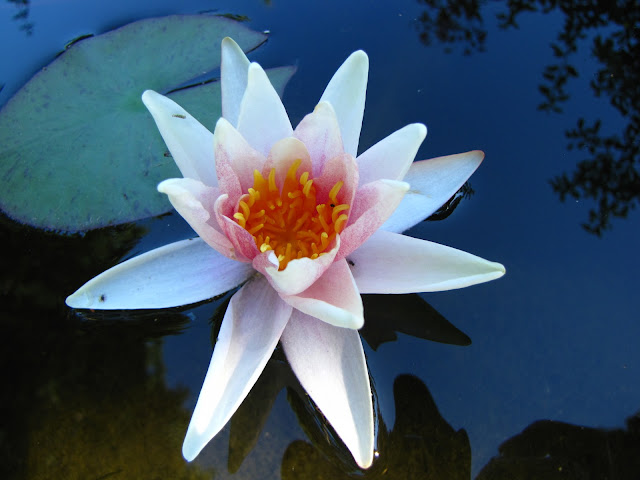 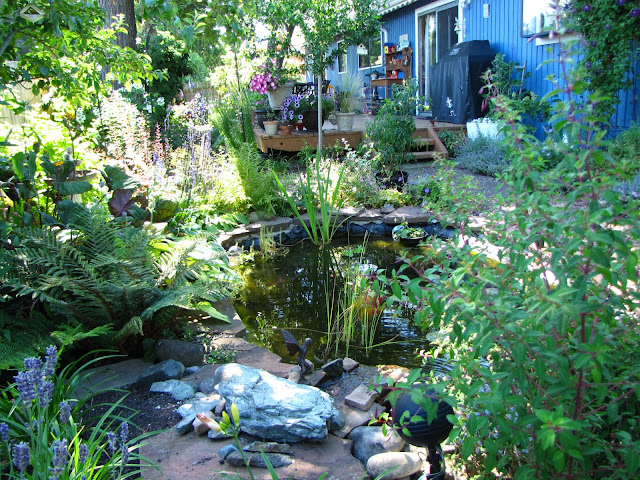 Looking across the pond everything is looking full and pretty good. 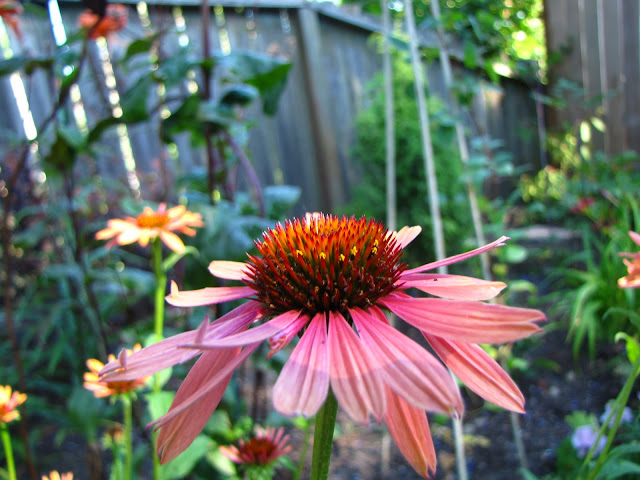 One of the Echinacea 'Sundown'.  It has grown quite a bit since last year, even under the Larkspur. 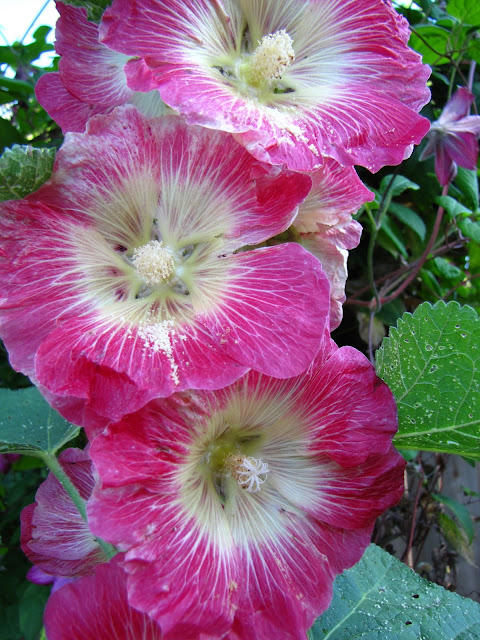 This Hollyhock planted itself here.  It's so pretty and looks nothing like the other Hollyhocks I have. 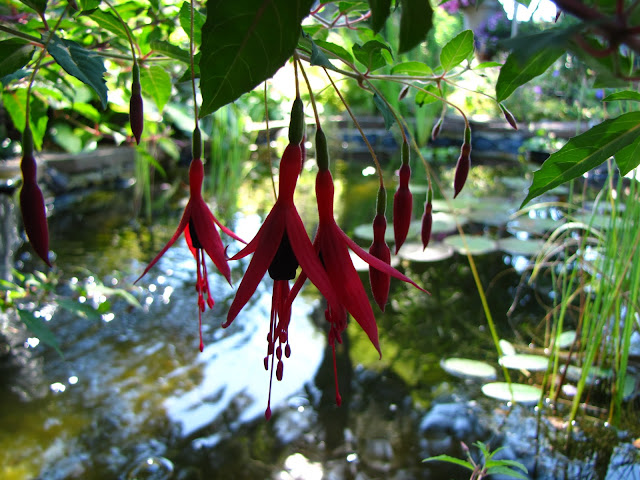 Fuchsia magellanica blooming by the pond.  I didn't realize it would spread from the roots.  It's come up about a foot from where the original plant is. 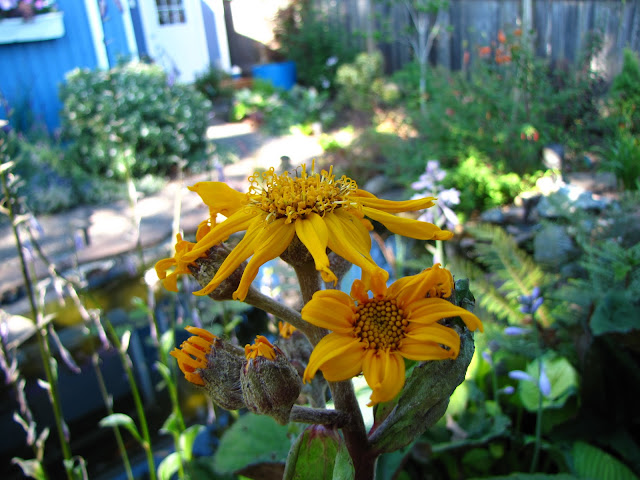 Ligularia 'Othello'   Definitely not one of my favorite flower colors, it's hard to tell from this picture that it's a goldish orangey yellow, but it's a flower so I won't complain.  The leaves really took a beating from all the slugs earlier this year and are just full of holes.
Even though I normally love the crowded and overflowing look of gardens it felt good clearing out the Larkspur and Poppies that had finished.  It was nice to see that my original plan is still coming together and that the plants are starting to fill in more.