Another week has passed by so quickly it seems like just yesterday I was doing last Friday's post.  The garden is looking good this week with new blooms and roses on another round of flowers.  I still have quite a few bare spots I'd like to fill and am trying to keep in mind bloom times as I fill them.  I tend to pull up the annuals and then fill all the empty places in with what end up being end of summer bloomers and then once Spring rolls around I feel like nothing blooms until mid July.  Now that I've realized what I'm doing it's easier to make sure there is more year round interest rather than everything blooming at the same time and having to wait a long time for new blooms.  I've also found that I've done far less plant moving this summer than usual.  I think I'm finally getting the right plant in the right place, although it took many years for some of them to get there. 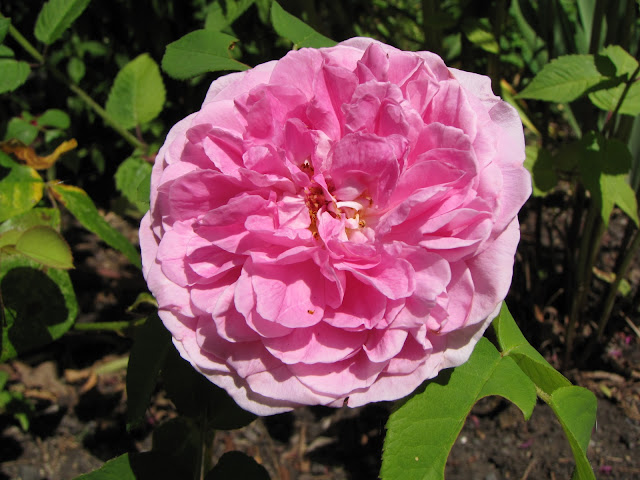 I'm so happy that Rose 'Gertrude Jekyll' has started blooming again.  I was a bit concerned about how it would end up doing this year.  Both this and 'Abraham Darby' were really hit with black spot pretty bad, but after using an organic spray and some organic rose fertilizer they both look much better. 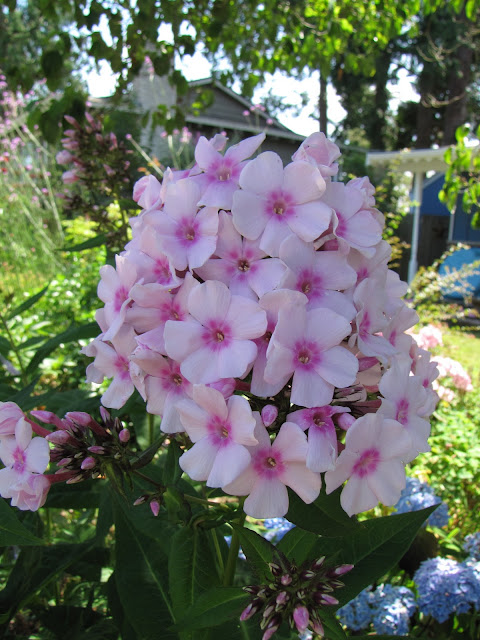 I always forget how many Phlox I have until they start blooming.  The plant blends in so well with everything else, then suddenly I'm surprised by all the bright spots of color.  I've lost track of which are which now. 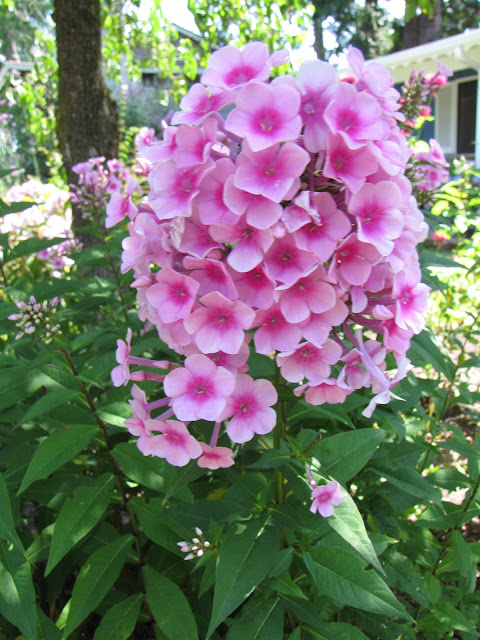 This one is the reverse coloring of the one above it and also reseeds quite a bit. 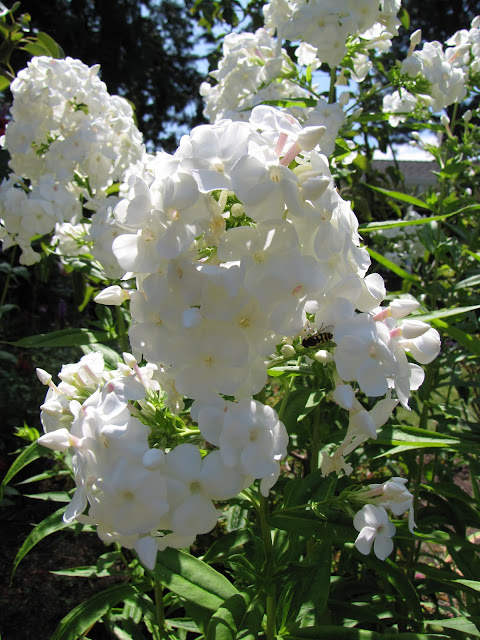 I always remember 'David' since it's the only white one.  It also reseeds like crazy. 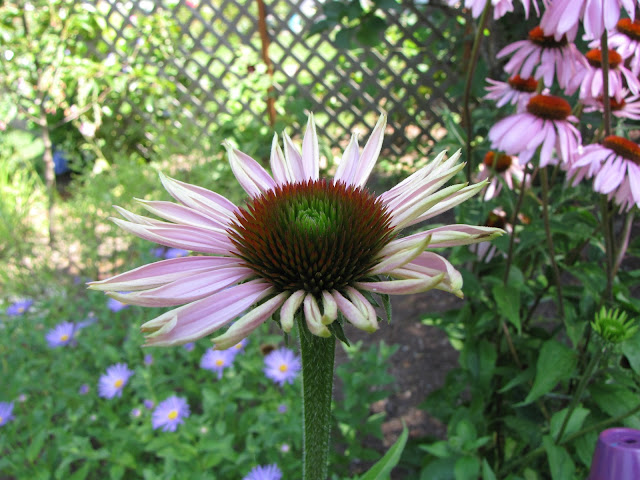 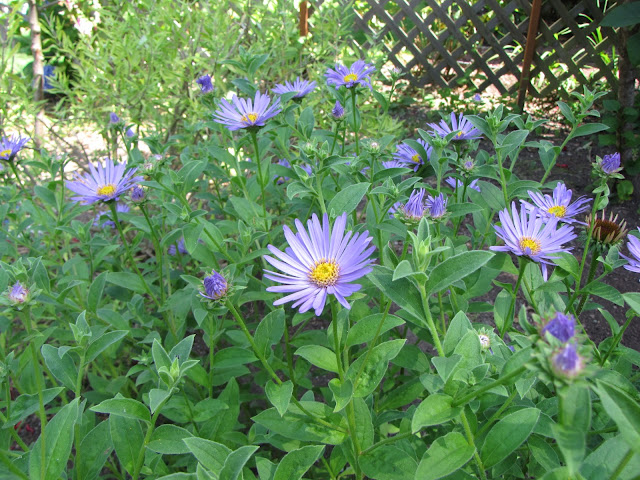 Behind the Echinacea is Aster 'Monch' which I moved last year.  It's in more sun and is growing up instead of reaching sideways for the sun. 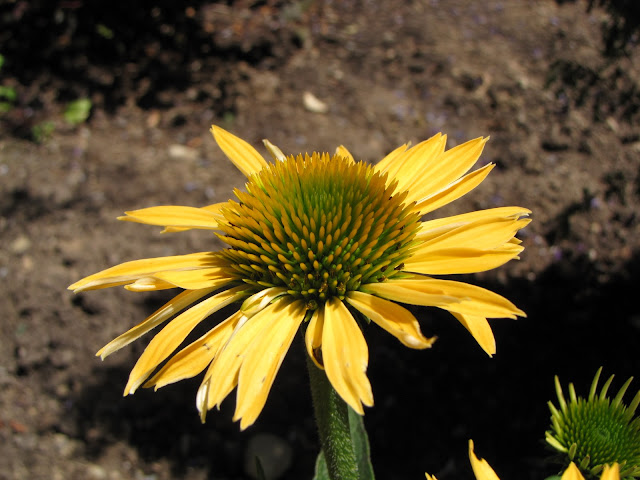 A new Echinacea 'Summer Sky' which is the color of the powdered cheese that comes with macaroni, not that I've ever served any of that to my kids.  ☺  Not sure if I like the color, a little fluorescent, and I'm not sure I would've bought it if it was in bloom at the time. 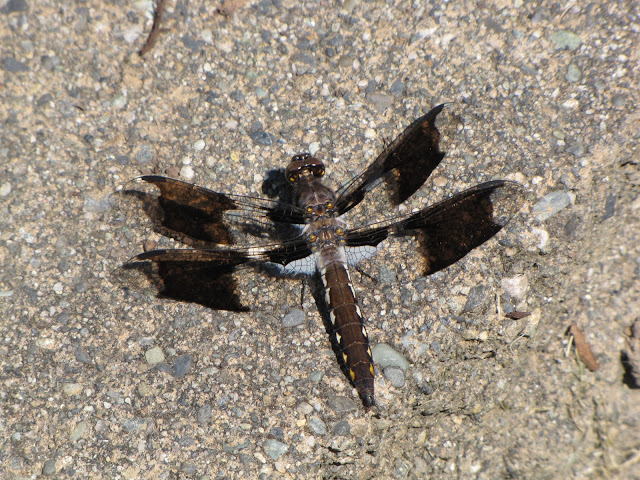 By this time of year Dragonflies are constantly swooping over our yards.  I love seeing their shadows float by when I'm outside.  This one seemed to like landing on the warm stones and pavement to rest. 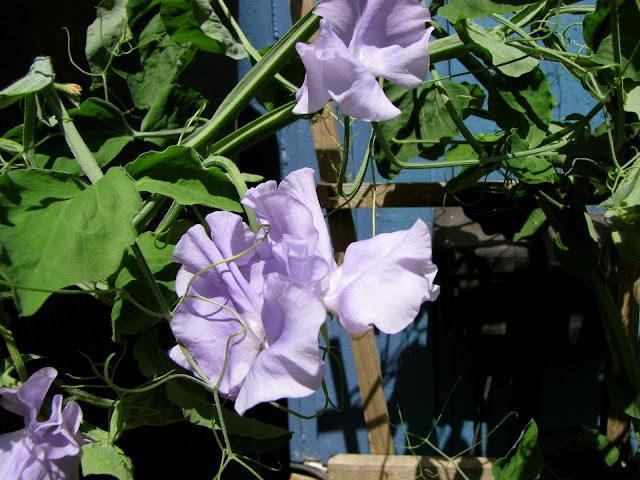 I've never had Sweet Peas bloom this long, they are usually long done by now.  These are planted by the back door and the scent really carries.  I keep picking little bouquets to put around the house.  Sweet Peas are one flower I do pick regularly, one to prolong the bloom time and two because they smell so good I like them in as many rooms as possible. 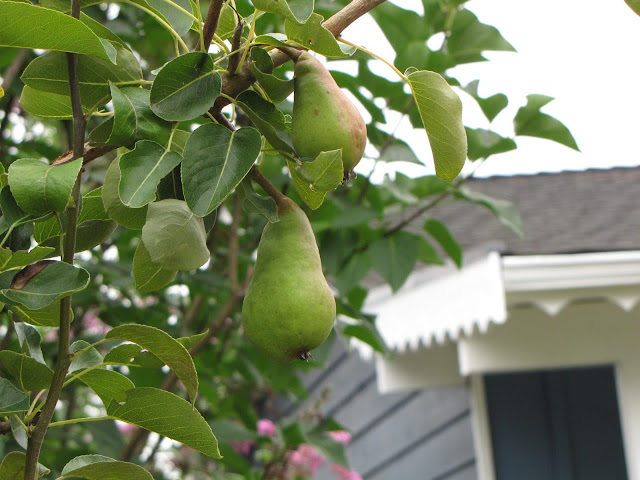 I'm so happy the Pear trees are producing pears in their second year.  They each have about 6 pears which seem to be growing quickly now.  Our apple tree still just has one apple, the fig tree is loaded with figs and the Blueberries are ripening and at the tart and juicy stage which is just how I love them.  There has been a baby Robin that loves them as well, almost every time I walk through the area the blueberries are I see him hopping around underneath.  He doesn't even seemed scared of me when I walk by, just looks up and then keeps going.
Tootsie hosts Fertilizer Friday each week.  This week she is sharing garden pictures from non-blogging gardeners so they can get a chance to share their pretty gardens with all of us.