Look who decided to show up...

Besides me that is.  Life seems to be getting busier lately and blogging is the first thing that gets pushed aside.  The poor garden has been pushed aside as well.  While I was out taking pictures I was horrified to see how bad the weeds are.  I don't know when they've gotten this bad.  Moss seems to be growing on a lot of the soil, and not in a pretty way when it's mixed with weeds.  As much as I try to be an organic gardener, I'm seriously thinking about grabbing a bottle of round up to at least use on the oxalis.
But, other than the weeds I found some really nice surprises, including a few that I had completely given up on. 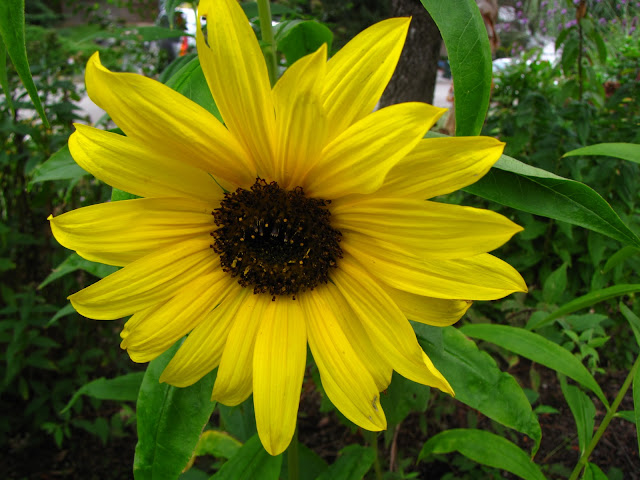 A Sunflower!!  Not one that I planted, those are no shows, but this one is courtesy of the birds.  It's only about 2 feet tall, but when you only get one it's hard to be picky. 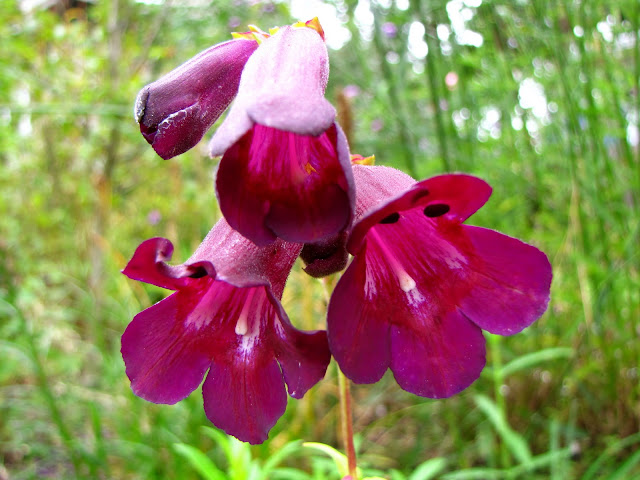 Penstemon 'Raven' was a $2 bargain last year.  I had just about given up on it. 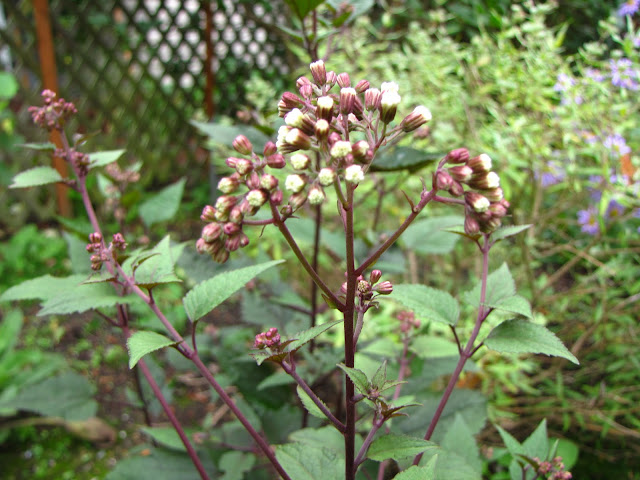 Chocolate Eupatorium / Joe Pye Weed finally has buds.  I know these are late bloomers, but still was surprised it was taking this long. 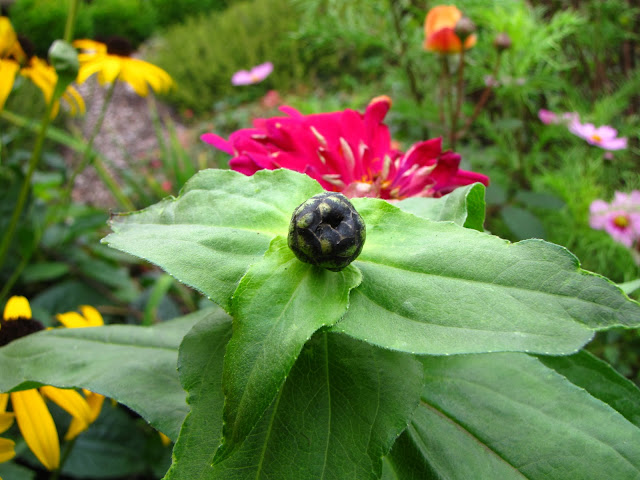 Zinnias that I planted from seed... in the beginning of July!  Sure took a while, but at least one is blooming. 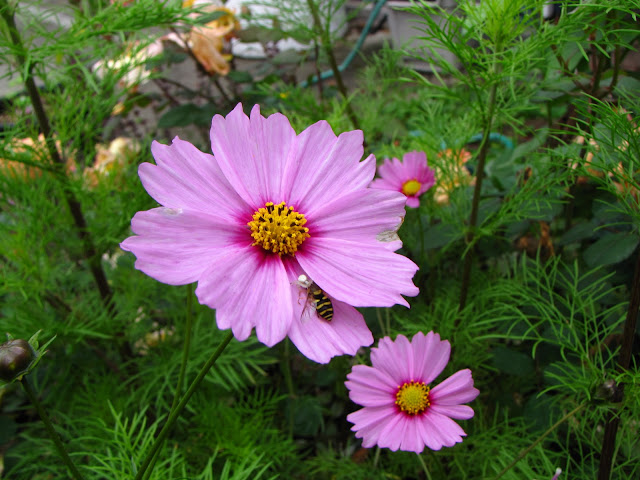 Cosmos that were started by wintersowing, that have just now started to bloom.  The flowers are much smaller than usual, but the insects don't seem to mind.  I don't think this is a bee, though it looked much more like a fly. 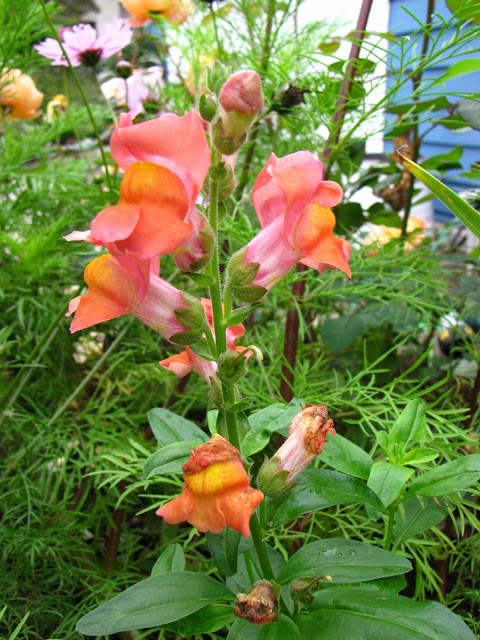 How about a Snapdragon that I didn't plant at all?!  It may have reseeded from last year, but I don't remember planting them in this area. 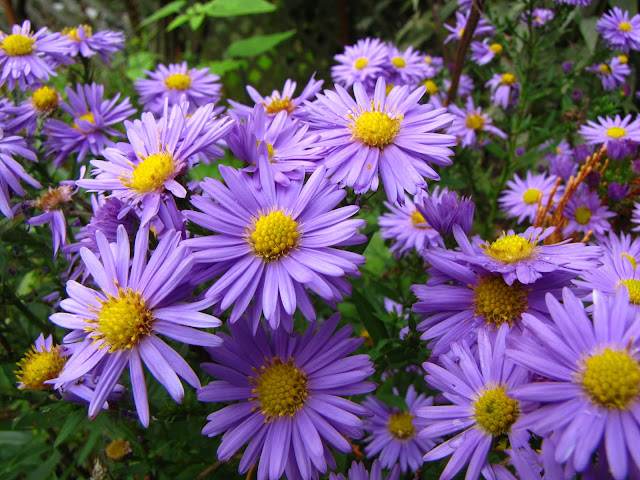 Aster 'Professor Kippenburg' seems to be a later bloomer.  The other Asters have been in full bloom for a couple of weeks already. 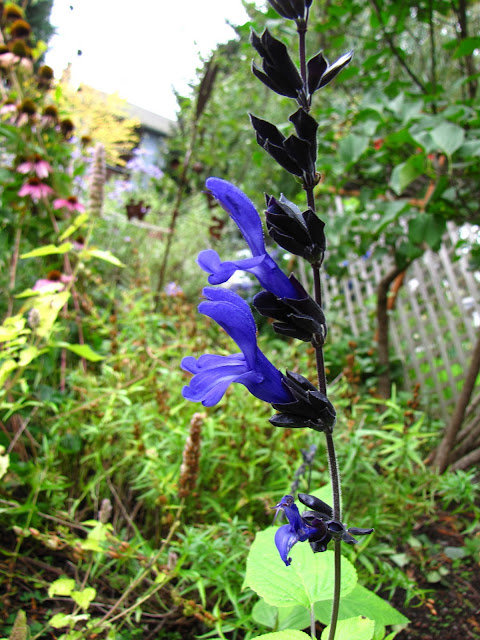 Salvia 'Black and Blue' that I showed as a bud on a recent post has finally started blooming. 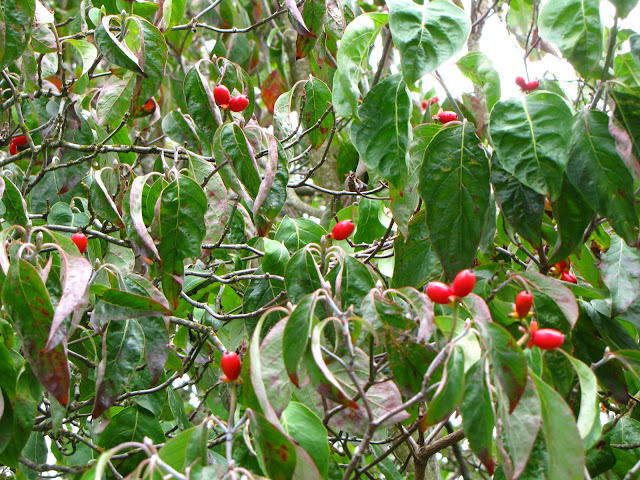 This was a really big surprise.  I had been seeing red berries around the back yard and wondered what they were.  I was surprised to see that the Pink Flowering Dogwood (Cornus florida) in the front yard was covered in these pretty berries.  I've only seen them on the tree a few times.  I guess that's why all the birds have been hanging out there. 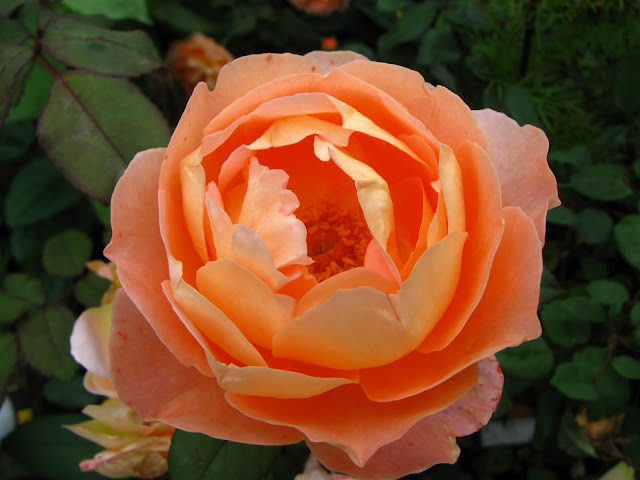 Now I'm not surprised at this one, 'Lady Emma Hamilton' has been blooming her head off still.  The color is just perfect for this time of year.
Hopefully I can start getting around to see what's happening in your gardens now.  I've been missing reading blogs and seeing what's going on.  I appreciate all of the comments that you've been leaving and hope to visit you in return soon.