The pond in May.

The weather has been perfect here. We enjoyed temperatures up in the 70's while our company was visiting. It's always fun when people other than us get to see the garden. We were able to sit outside and visit, but it sure was hard sitting there while the weather was so nice.
Yesterday afternoon I was able to top off the pond with some more water and take a few pictures of how it's looking right now. While I was outside all of a sudden lots of Crows started circling overhead and calling to each other. After a couple of minutes I realized what they were so upset about, a hawk was near an area where there are some Crows nests. Now I know why we never see hawks around here very often, the Crows chased it off before it could get into any trouble.
As the sun was going down I was watching the pond out the window and saw a small bright yellow bird hopping around the pond and in the waterfall. It was a canary yellow with an even brighter yellow stripe on the top of it's head and just the lightest gray markings on the side of it's head. I've searched books and the internet trying to figure out what it could be. It was definitely not a Goldfinch or a warbler. I hope it comes back so I can get some pictures. 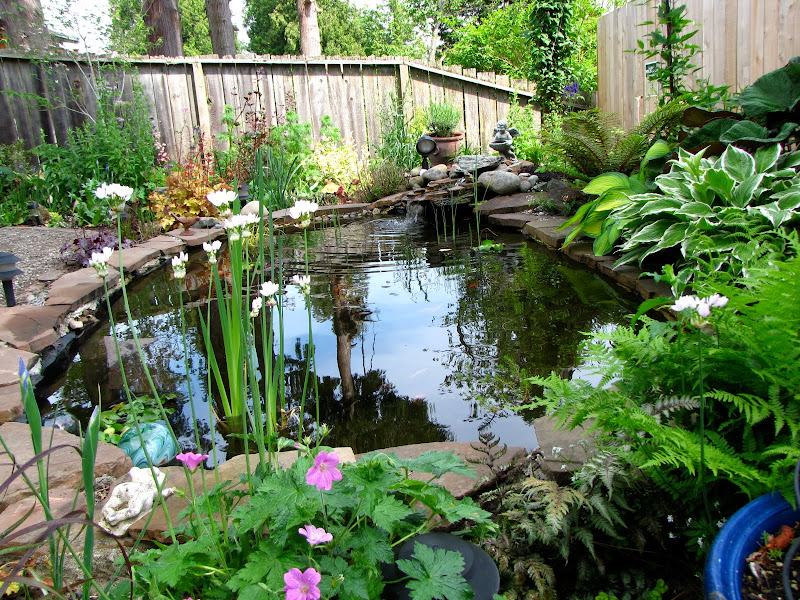 I didn't have much luck with quite a few of my pond plants this past winter. I already discovered that the Pickerel Weed didn't survive and now just realized that the Cardinal Flower didn't make it either. I've had it in the pond for years, and I'll definitely replace it, I love the tall red flower spikes it has. 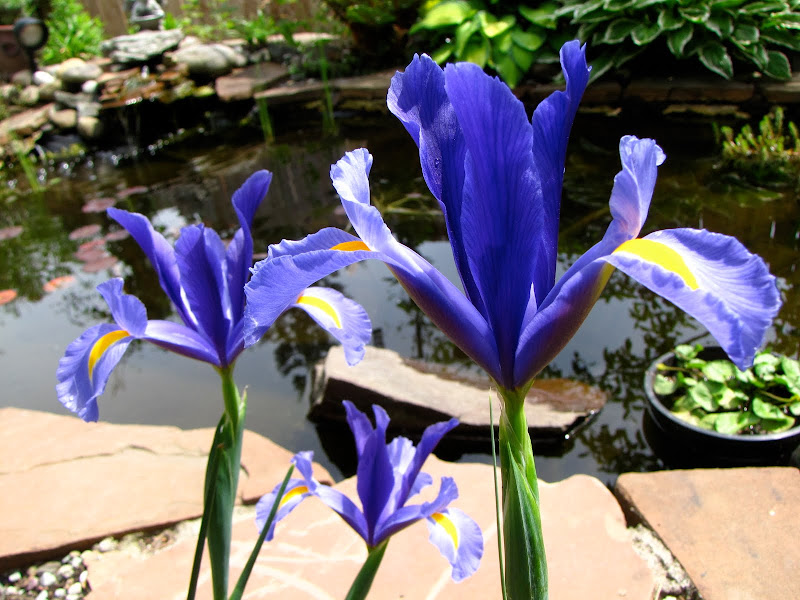 For some reason I thought I had planted more Iris reticulata around the pond and was trying to figure out what was going on with them. As I was going through some plant tags I realized they were Dutch Iris and now they are blooming all around the pond. 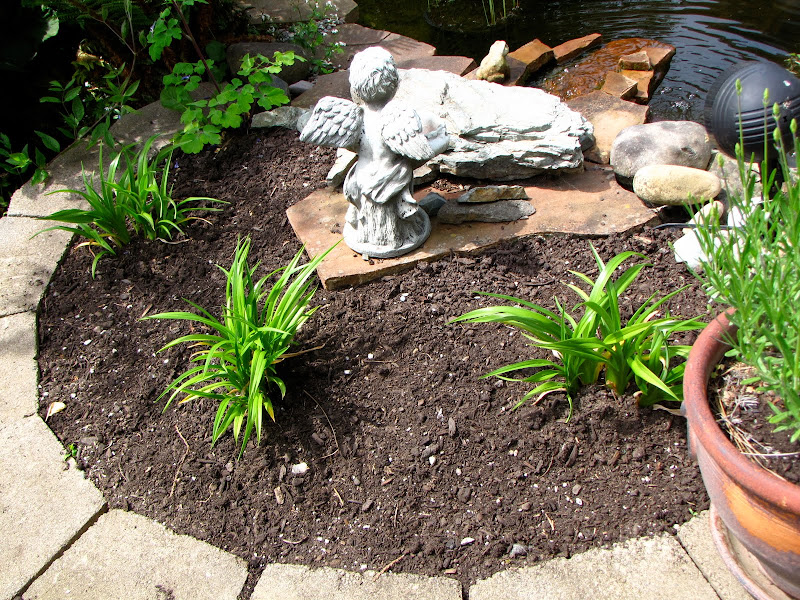 Around the waterfall is this planting area that I couldn't decide what to do with. I had thought of turning it into a bog, but decided to try growing these small Daylilies here. They are 'Mini Pearl' a coral/apricot color and are also rebloomers. I'm really trying to stick with my color scheme in the pond area and so far I really like how it's all looking. 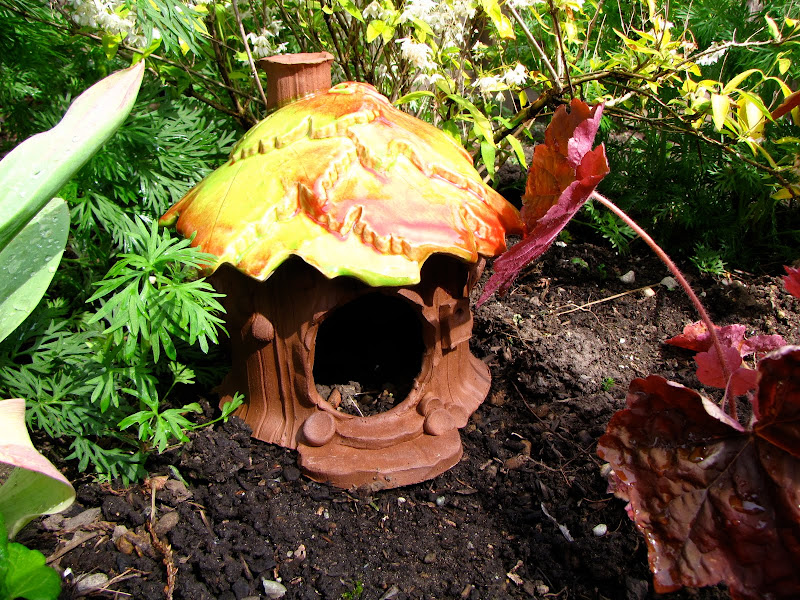 While we were at a nursery over the weekend my husband bought me this cute little toad house. If a frog isn't going to move into our pond than maybe a toad will. They are around this area, just still haven't found the pond yet. And if the toads don't like it, then maybe the garden fairies will. 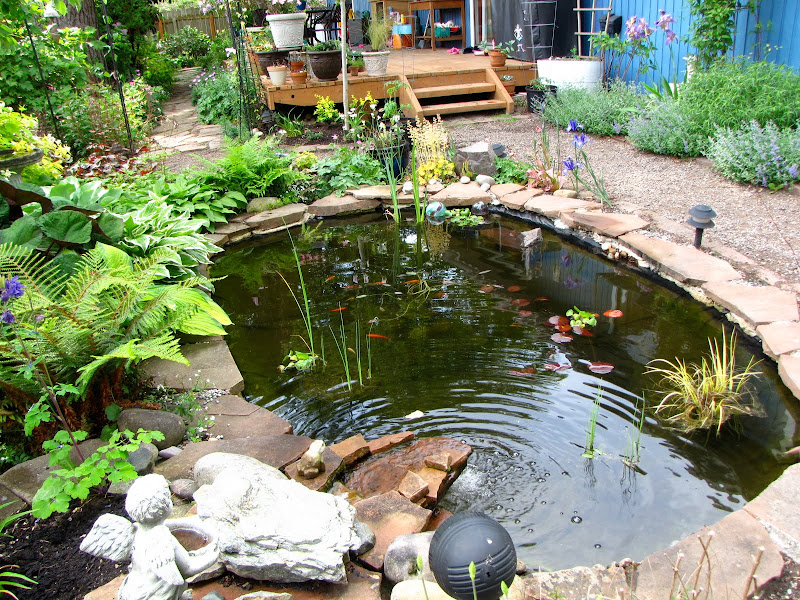 From this angle you can see a little more of the yard as well as the fish that were busy following each other around. 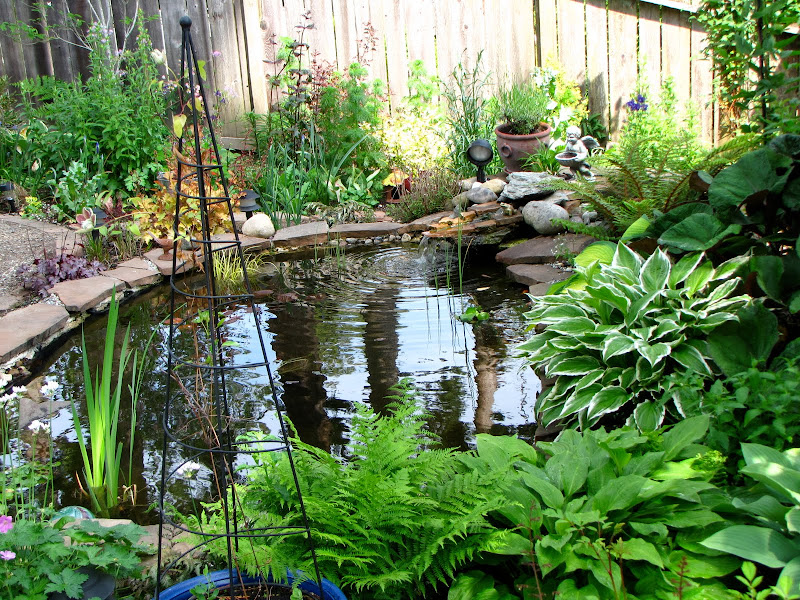 The camera didn't capture the pretty lighting very well, everything looks so fresh and green. Clematis 'Josephine' is growing on the trellis. It has a couple of blooms but just doesn't seem very happy. I may plant it somewhere in the front yard if it doesn't look better soon.

Here's a short video of some of the fish chasing another one around last week. The kids in the background are from the school playground on the other side of the fence.

Posted by Catherine@AGardenerinProgress at 7:33 AM
Labels: goldfish, koi, Pond