Petting fish at the Watergardens.

Did you know there was such a thing as "petting fish", kind of like a petting zoo? We found that out this weekend when we visited one of my favorite places. Almost a year ago I did this post on Russell Watergardens. We returned this past weekend to purchase some new fish for our pond to replace the ones eaten by the Heron earlier in the year. As you walk in there is a large indoor pond with the "petting fish". When we have visited other times the kids have always been given Koi food so they could feed the fish, but we had never learned about petting the fish. This time the owner showed my kids as well as another family of girls how to pet the fish. 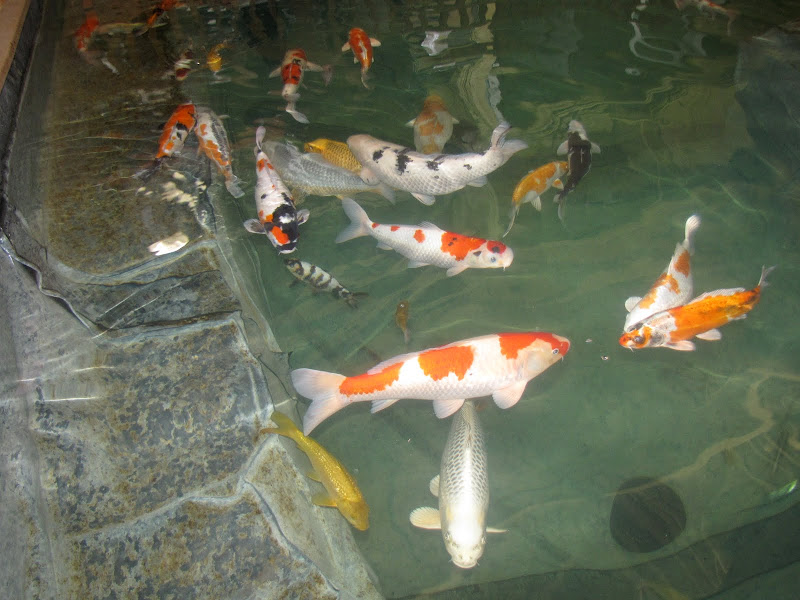 The large white Koi with black stripes is Tiger, he (or she?) is the oldest one here, 11 years old. I hope one day one of our fish can get to be that old. The average life of a Koi in Japan can be 70 years, and some have even made it to 100 years old. 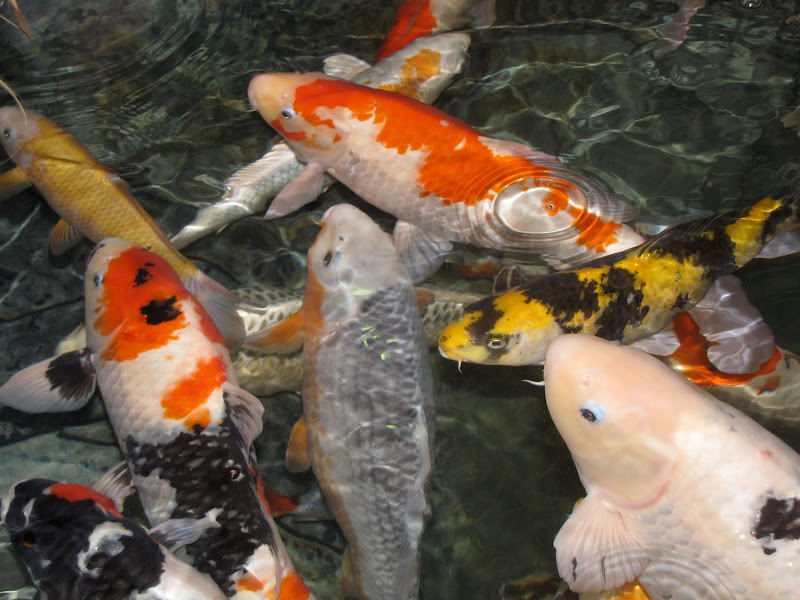 Just a few of the "petting fish" looking for a handout. 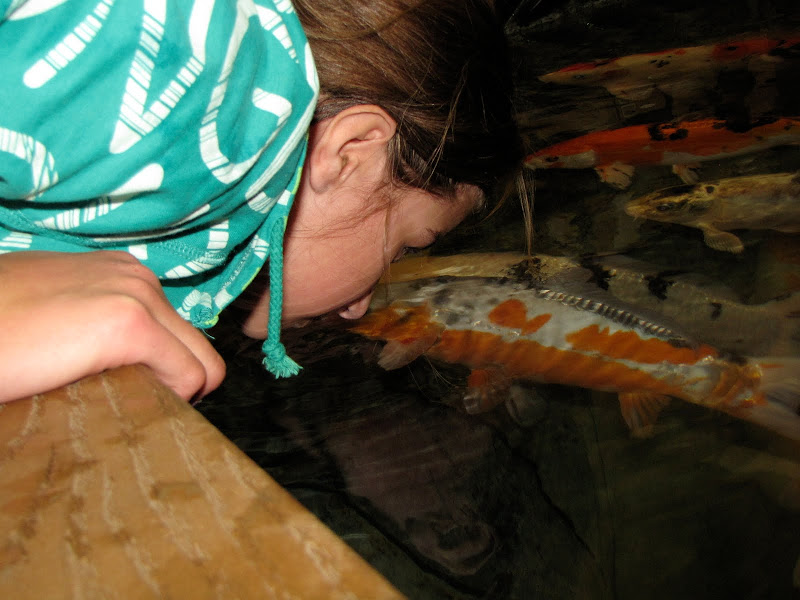 They were also shown how to get the fish to give them a kiss on the nose. Here Sweet Pea stuck her nose in and got a kiss. 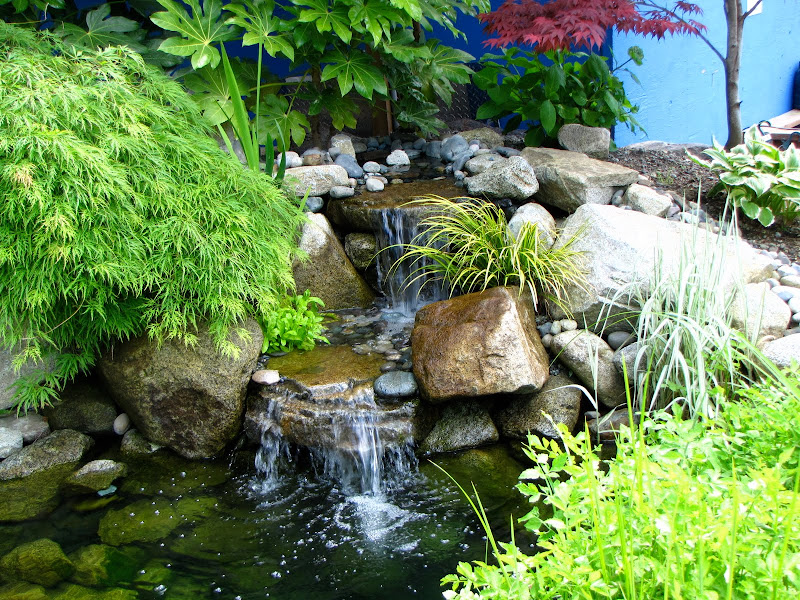 I thought I would share some more of the outdoor ponds and plantings at the Watergardens. It's just beautiful there. Each pond made me want to try something new with ours, or maybe just start over one day and get our waterfall to look like this one. 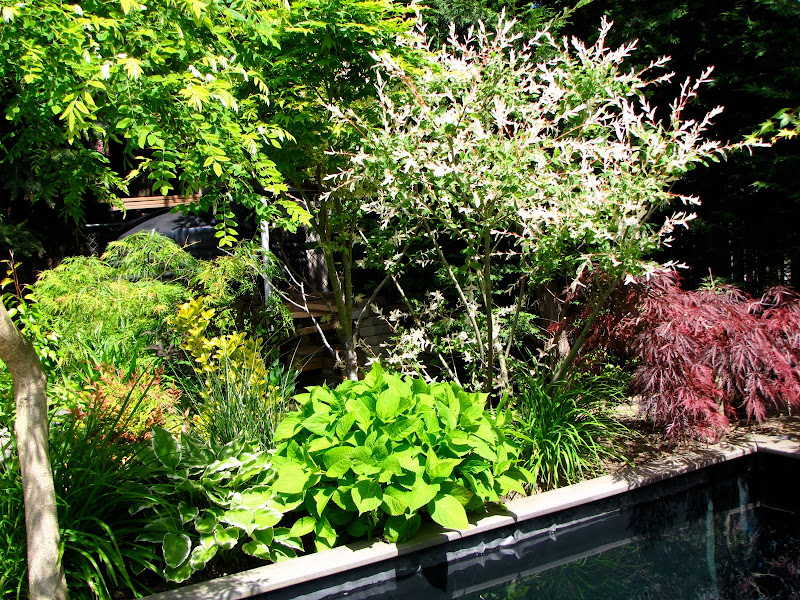 I could see that everything seemed larger since our last visit a year ago. 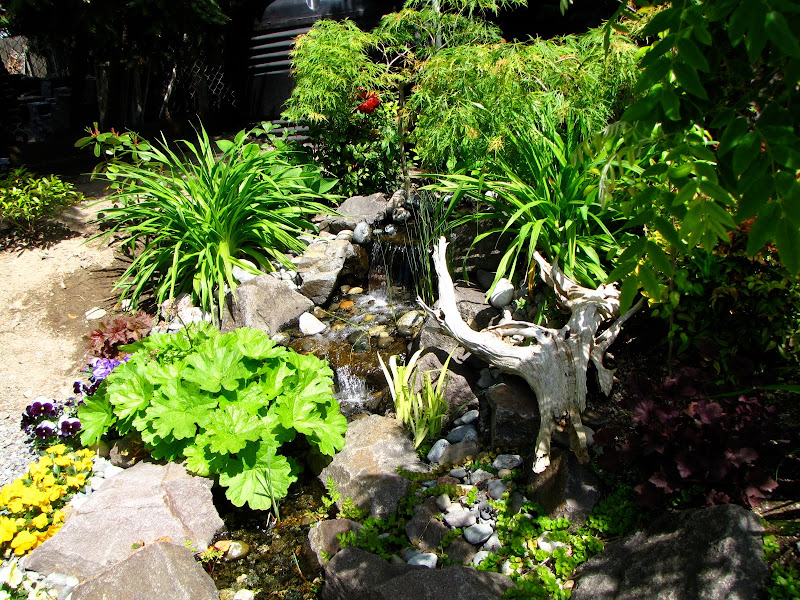 The waterfall of a small shallow stream. 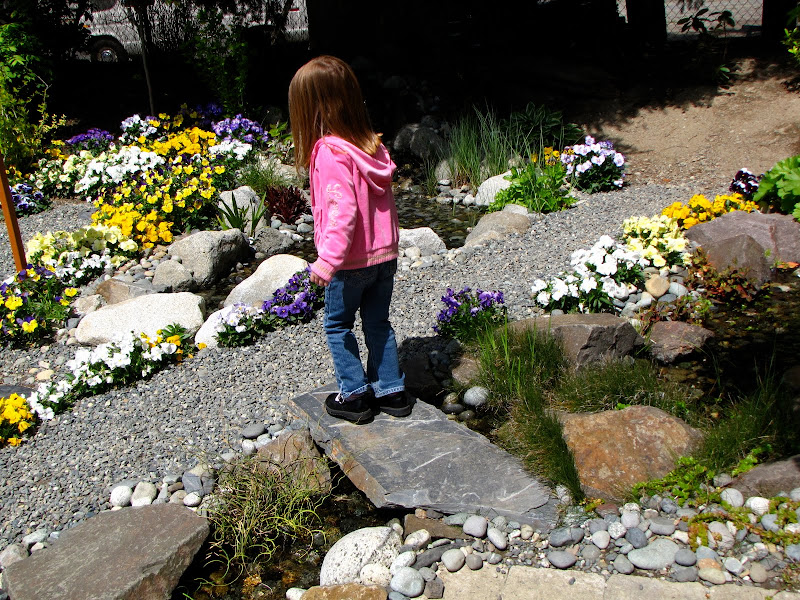 The Littlest Gardener liked crossing the stone bridge across the stream. There were lots of Pansies planted for color, but it looked as if they were getting ready to change those out with the many flats of summer annuals they had sitting under cover. 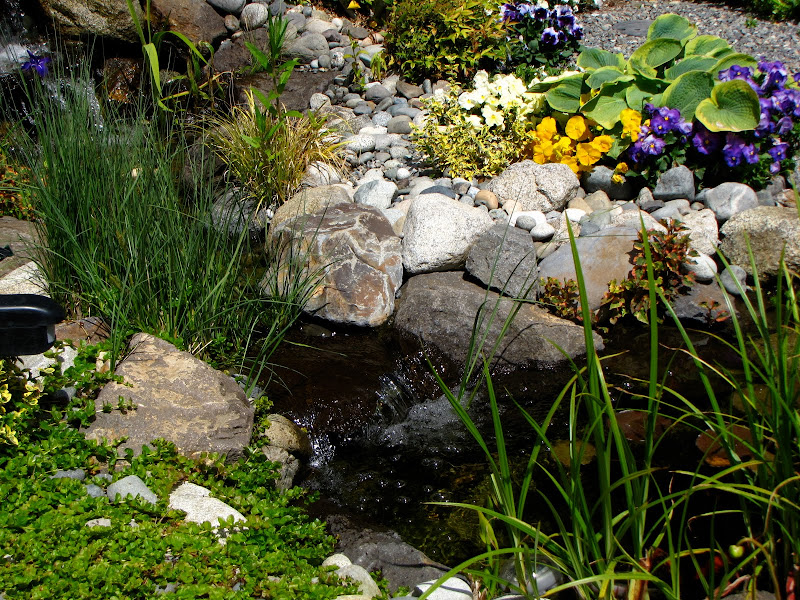 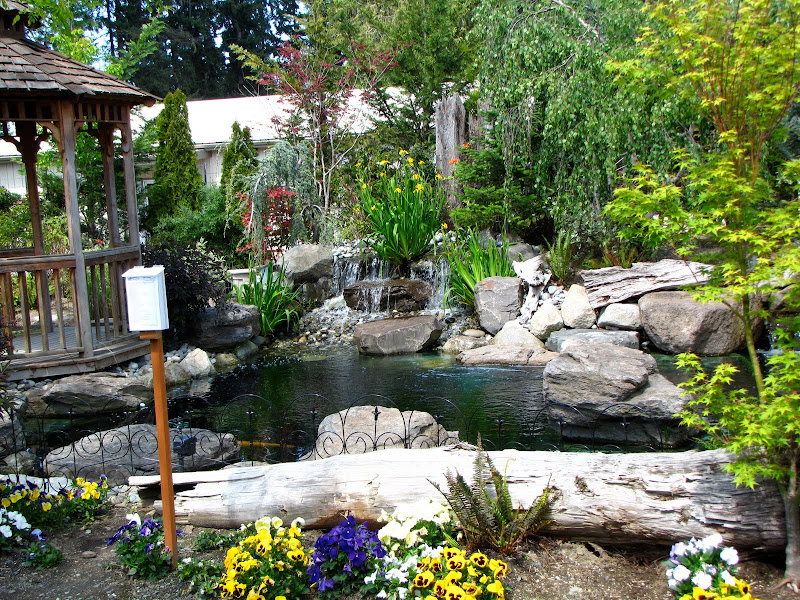 These ponds were very deep, probably in the 8 to 10 foot range. They made me a little nervous, but the deep ones were all fenced off pretty well. 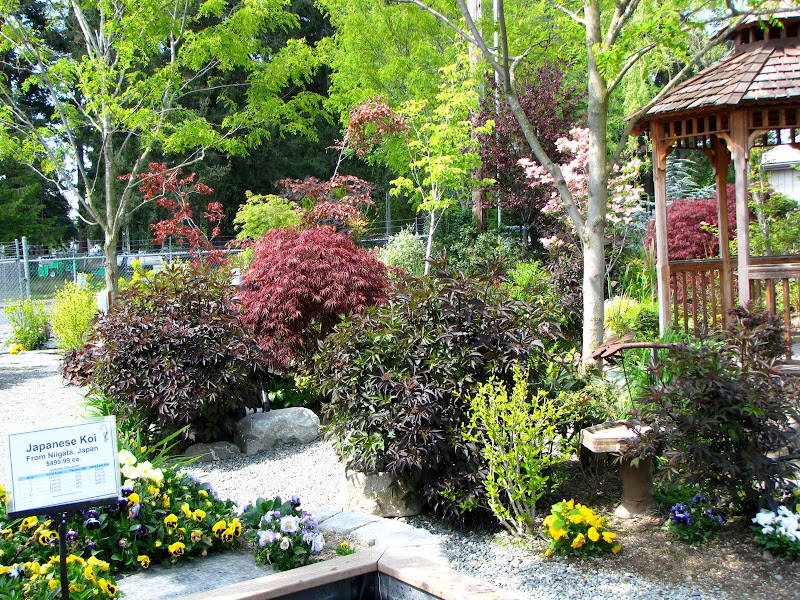 I just loved all of the colors of the leaves here, aside from the Pansies there were no flowers blooming. It really proved just how important foliage is to a garden. As you can see the sign to the left the fish in this holding tank were $500...each! 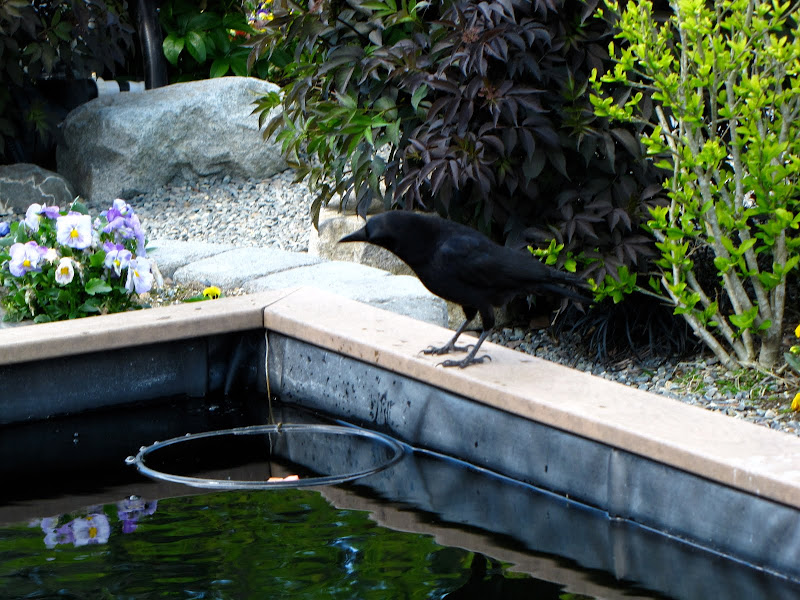 We were told this Crow likes to bathe in this holding tank. The man helping us said that they are well protected from Herons here, but that several families of raccoons lived nearby. 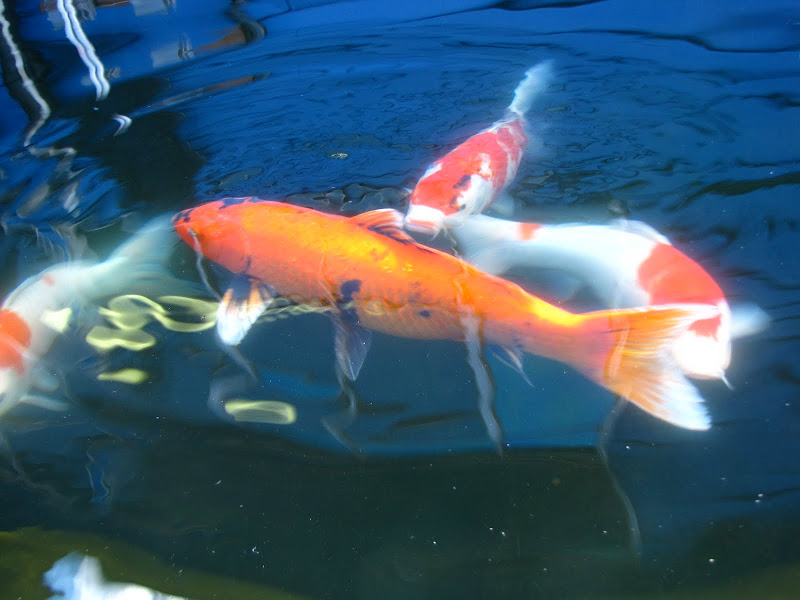 This is what a $700 fish looks like. I couldn't believe that these were not the most expensive fish there though. We were shown another Koi for sale...$4000. It was beautiful, but I'm not sure that would ever be in our budget.
I forgot to take pictures of our fish before they were released into our pond. We chose 3 Shubunkins which are white with spots of orange and black on them and two other Goldfish that are orange and white, I think they are Sarasas.
One last interesting thing I learned there. We were told that Herons actually emit a pheromone which attracts the fish to them. I tried to look up more information about this and was unable to find more, but that would explain one reason why Heron seem to have such an easy time catching fish.

Posted by Catherine@AGardenerinProgress at 7:38 AM
Labels: koi, Water gardens