Gardening with my family - the payoff.

Earlier this year my husband and I decided to finally put our dream of raised beds and a picket fence for our front yard.  When he planned to take the same week off in February that our kids had off from school we figured it would be another mild week of our strange winter weather.  Up until then we'd had one short spell of unusually cold weather in November, followed by above normal temps. 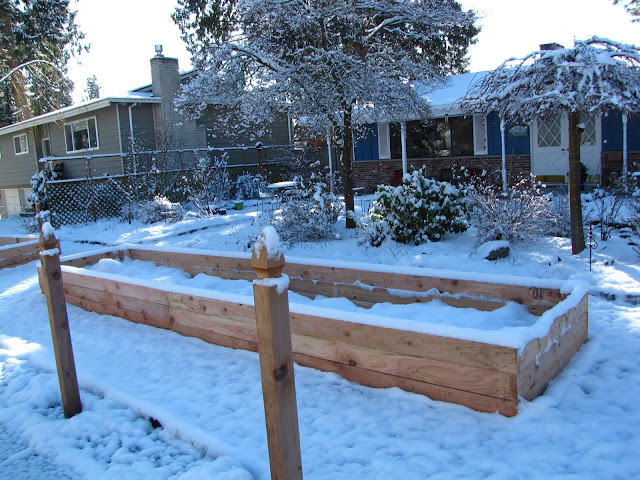 Then the week of planned garden renovation came and of course it snowed and was below freezing, turning what we knew would be a physically difficult job into an even more difficult job once the ground froze, the gravel pile froze and it was just too cold some days to do work.  But we knew that in the summer we'd be really glad that the hard part was done and we could then enjoy the fun part. 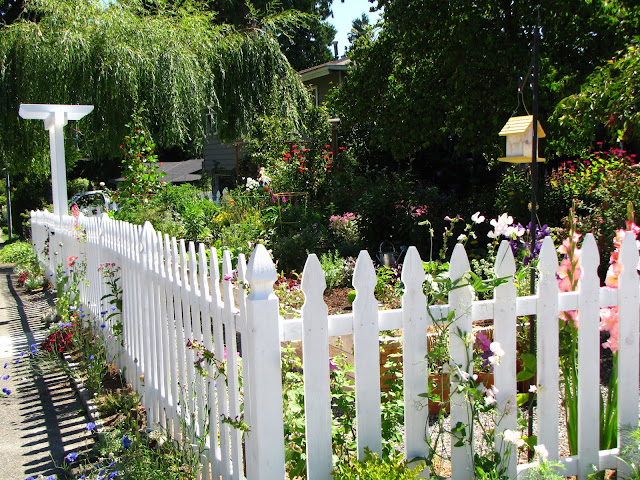 And we were right.  It was worth all that hard work just 6 months ago!  Now the payoff isn't only picking fresh vegetables, but the other things our family has gotten out of it. 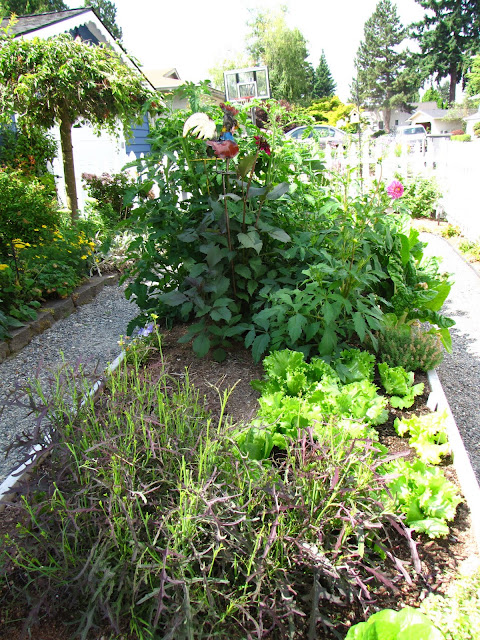 For example my hope that my husband would take on some of the vegetable garden chores so he could find some relaxation in standing and watering or pulling a few weeds (believe me, it can be relaxing).  I've seen him many times checking the garden, work bag still on his shoulder, before he's come in from his very long work day.  Last evening I looked up to see him grabbing a pair of garden scissors  from the front potting bench.  When I went out to see what he was up to, he told me he needed to cut the flowers of of the greens and lettuce so they didn't go to seed.  He said, "What's it called?  Bolting?"  Never did I think he would be that interested.  He's also been having a great time going out and picking chard and other greens to cook with. 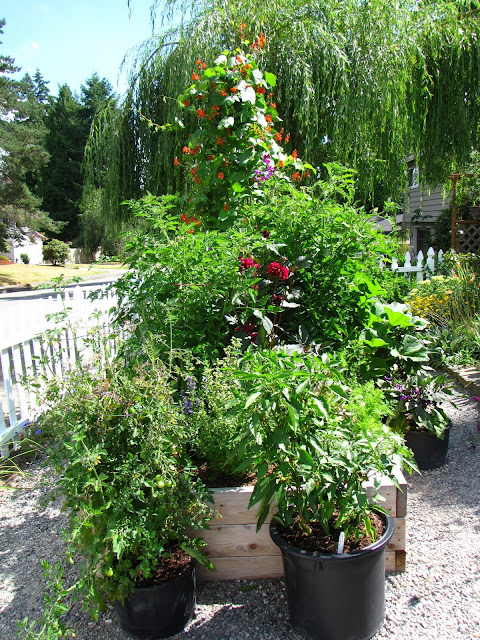 Another great thing my oldest daughter said to me the other night was how it was fun to have a "job" that was going out and picking the green beans, patty pan squash and blueberries.  Her and her little sister laughed and were so excited as they found more and more to pick.  Much more fun that taking out the trash or cleaning your room I guess. 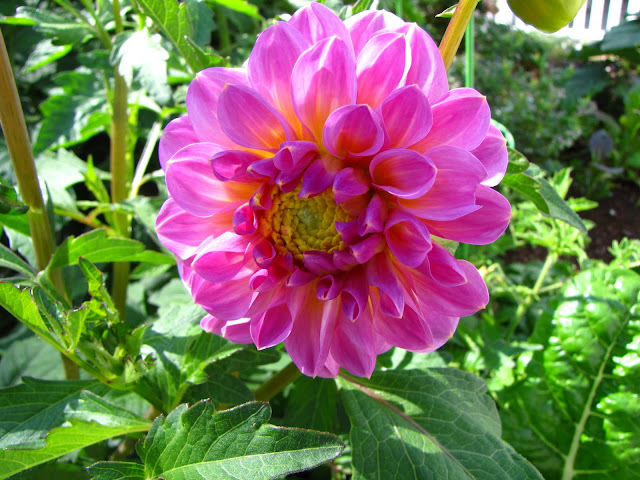 The garden is far from perfect, not quite everything went as planned.  I had hoped for more edible flowers, but not everything flourished as I hoped.  But I did get some pretty Dahlias, and they are as pretty as I thought they would look blooming among the greens. 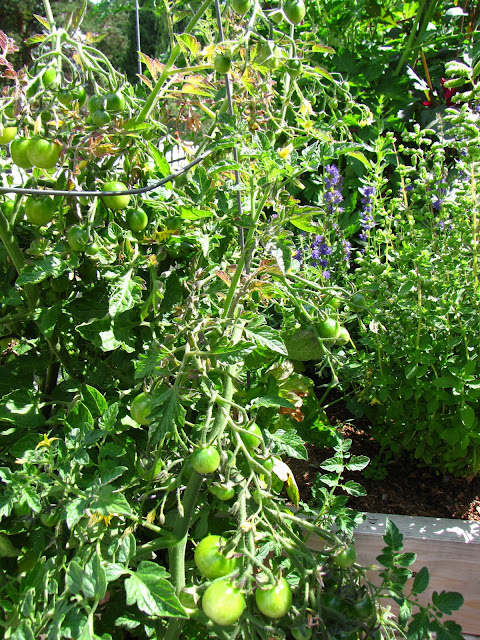 We're still waiting for the tomatoes to turn red.  The Littlest Gardener occasionally will find a red cherry tomato and will feed it to me as I garden.  I've never been fed while weeding before! 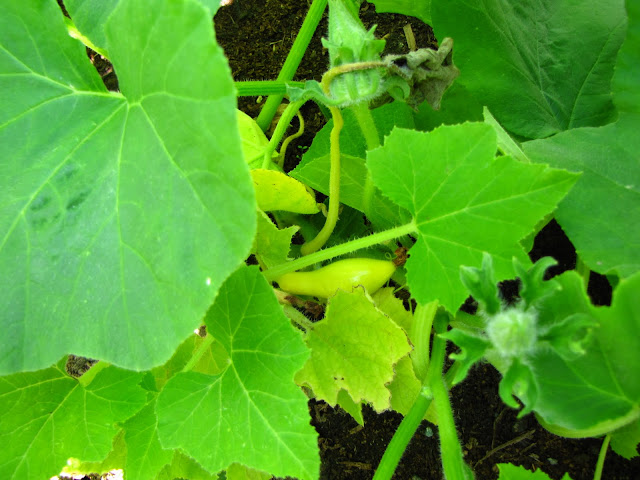 I'm sure some would say the beds are overcrowded, but how could I say no to Sweet Pea when she went to the trouble of digging up the plants and bringing them home from school.  She started them in science class for a class garden.  She was very proud of the squash and tomato plants and they are all doing well. 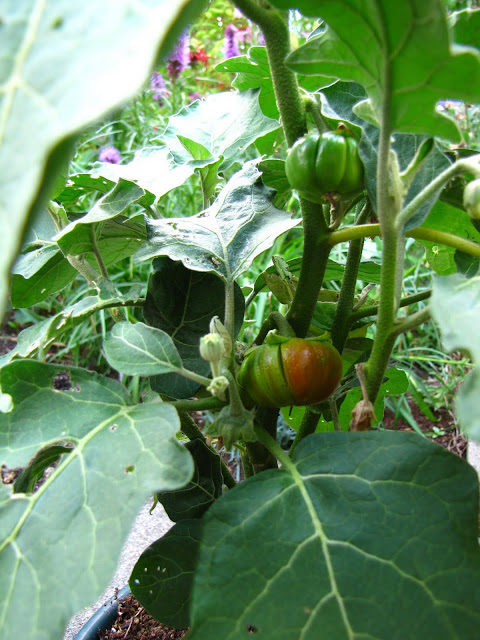 Never would I have expected back when we started the garden project back in February, that Sweet Pea would use her Christmas Amazon.com gift card to buy 'Pumpkin Peppers' seeds.  She did that all on her own and was very excited to show me the seeds when they arrived.  Now the interesting ornamental peppers are starting to turn orange. 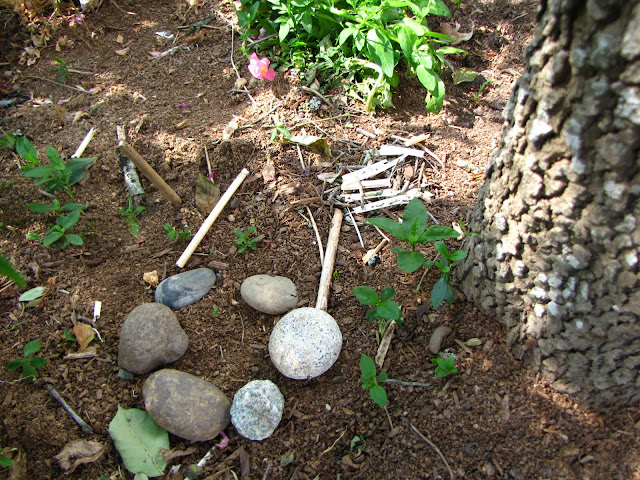 Something else interesting I've found, we'd never seen evidence of the garden fairies in the front yard before.  Now I've started finding signs of them this summer.  Guess they like the changes too. 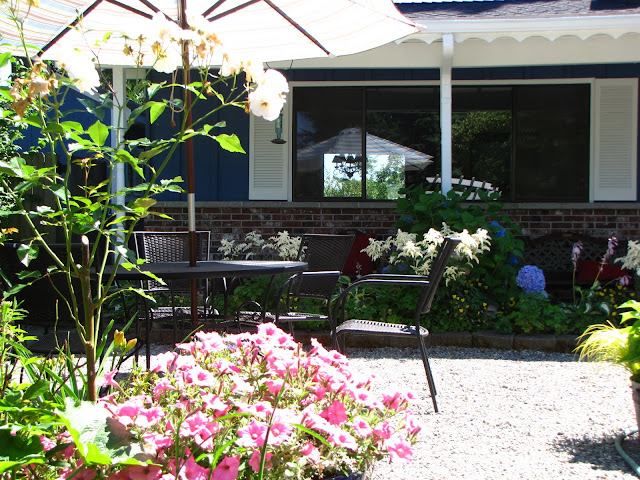 Since we've finished our garden renovation we've also ended up with a whole other place to spend with each other and family and friends.  We've had many meals in our new eating space, as well as somewhere to just sit and talk.

So gardening in the front yard has had a better payoff than more gardening space for flowers and food.  It's taught us about new things, some we didn't even know we were interested in, a place for imagination and play and fun.  I hope you can find some of the same joys gardening with your family.
All words and photos in this post are property of A Gardener in Progress.