Making the most of an unexpected sunny day.

This morning while watching the early news I saw reports of snow in some areas south of us.  After seeing that I didn't have much hope for how our weather would be today.  The sun tried coming out between rain showers all morning then finally broke through and stayed out the rest of the day.  The Littlest Gardener and I headed out to plant 'Golden' beet seeds, two hours later we finally got them planted.  It was so pretty I wanted to take advantage of the sun and got some cleanup and weeding done and dug up a dead hydrangea and planted a new one in it's place.  The Hydrangea was 'Ayesha' which had bloomed sporadically over the 10 years I've had it and I guess finally decided it didn't want to be here anymore.  I had an 'Endless Summer' left from when I rearranged our front flower bed, so now it finally has a home. 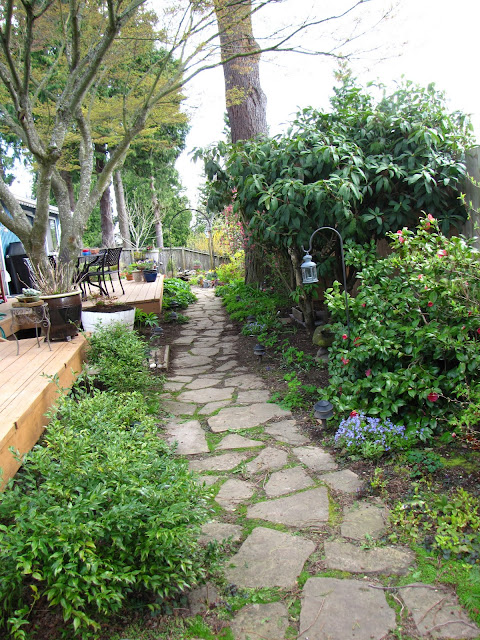 It's hard to tell from the pictures because it was a bit cloudy but it felt warm (53 degrees is feeling warm lately) and the sun was out. 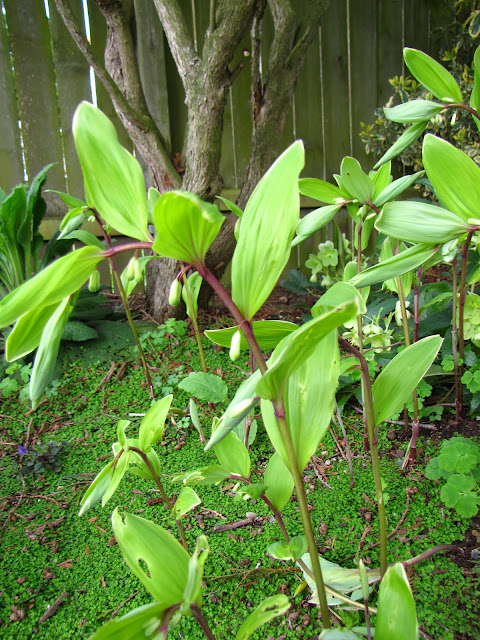 Solomon's Seal (Polygonatum) has gotten a little beat up, but it's starting to bloom. 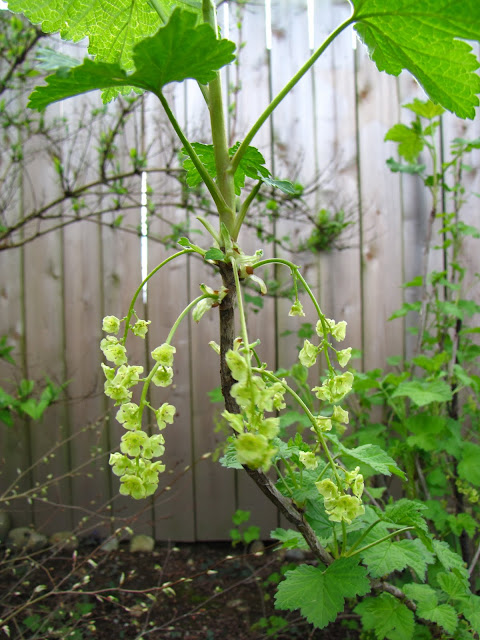 Currant 'Wilder Red' has the cutest little flowers.  I'm not sure if all currants area bitter, but these ones are unless they are completely ripe.  The birds even leave them alone. 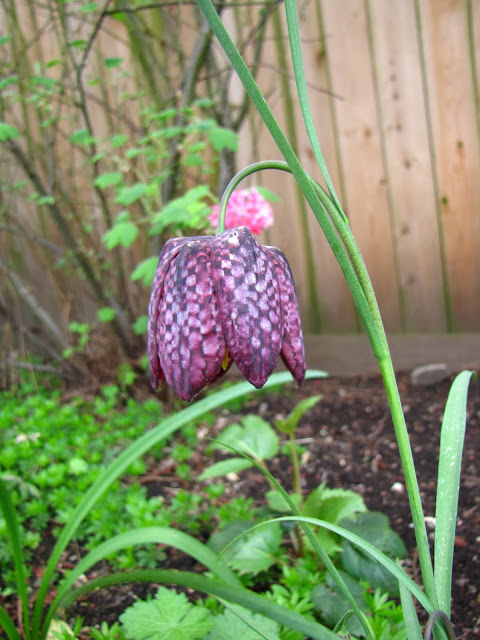 Frittilaria or Checkered Lily is blooming and has 4 or 5 more buds on this stem.  I didn't realize more than one flower came up from a bulb. 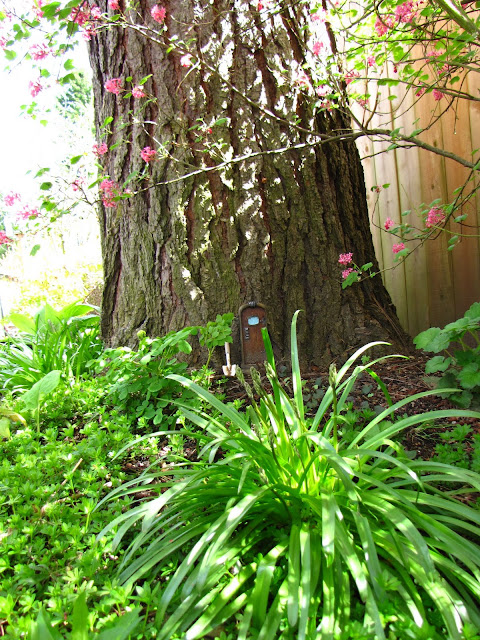 The garden fairies have been busy in the garden, they are waiting for the Bluebells to bloom.  I think they may use them for hats? 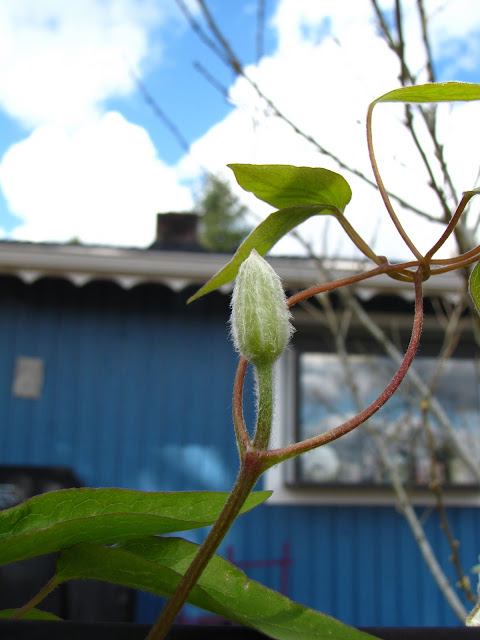 I moved Clematis 'Nelly Moser' to the arbor over the path two years ago.  Up until then I had gotten one bloom from her.  She's got quite a few buds already. 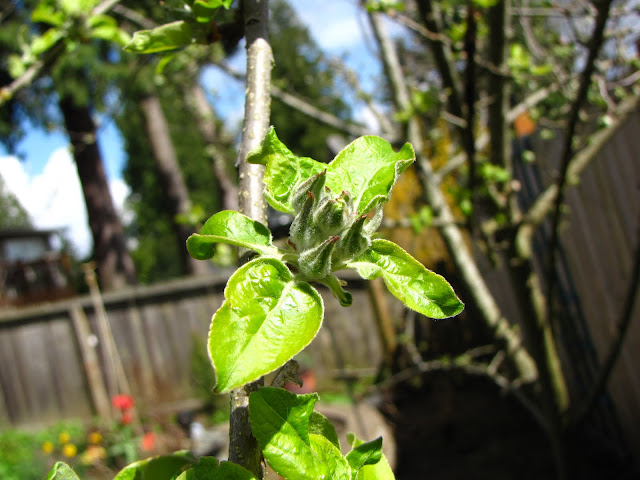 The apple tree is loaded with buds.  Last year after a very mild winter we had very few blooms and about two apples.  I think this will be a good year, if the worms don't get to them again. 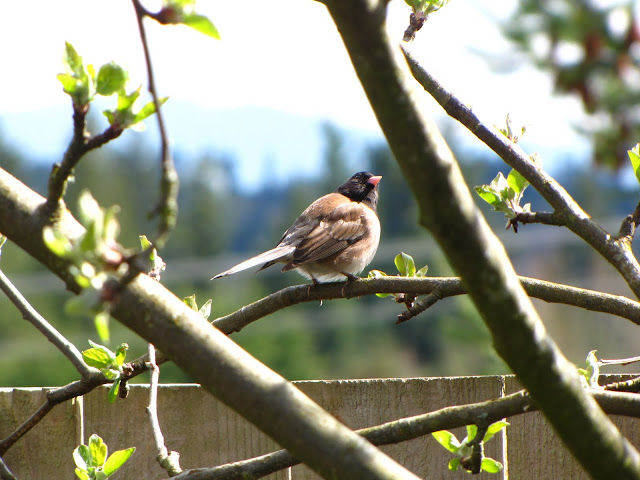 While I was taking pictures of the apple tree there was a pair of Juncos annoyed that I was standing close to the birdbath they've been using lately.  It seemed to be looking up to the sun. 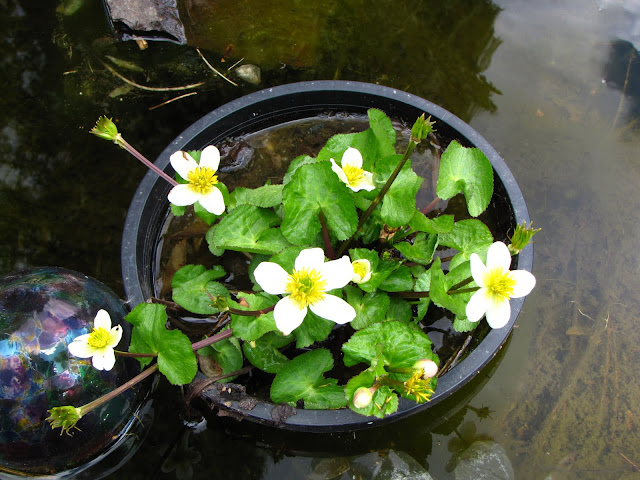 The Marsh Marigold is still blooming.


I'm not sure if anyone else around here is noticing that the birds don't seem sure about when to start nesting this spring.  They seem to be starting and stopping.  I've seen Chickadees going in and out of 3 different birdhouses (and I think they are 3 different pairs) as well as Towhees, Wrens and Crows with nest supplies in their beaks.  It's been going on for several weeks.  Usually it seems they pick their birdhouse or nest spot and they are pretty consistent about visiting it and bringing in their nest building supplies.  I wonder if the unusually cold weather has anything to do with it?
All words and photos in this post are property of A Gardener in Progress.