Some things to be happy about!

Thank you to everyone who gave input and suggestions about what could be wrong with our Japanese Maple tree.  I love that there are so many knowledgeable gardeners out there willing to help.  I'll keep you posted if I'm able to find a way to save the tree, but it doesn't sound too promising for now.  I'm pretty sure it is Collar Rot or Phytophthora.  It sounds like there isn't a lot that can be done aside from pulling soil away and treating with a fungicide, but that seems to be only slightly effective.  I guess we'll just enjoy it while it's here.  It surprising how fast you can get attached to a tree.
But, luckily with one disappointment in the garden there are usually several things to help cheer you up.
I found that there are some Zinnia seedlings, not many but a few at least.  I discovered that a Dahlia has sprouted, I had given up on them but one has decided to send up some foliage, so maybe there's a chance for a bloom.  The Pink blueberries ripened but the Littlest Gardener and her little friends couldn't wait to eat them before I could take any pictures.  My Hollyhocks seeds from Tina are starting to grow too! 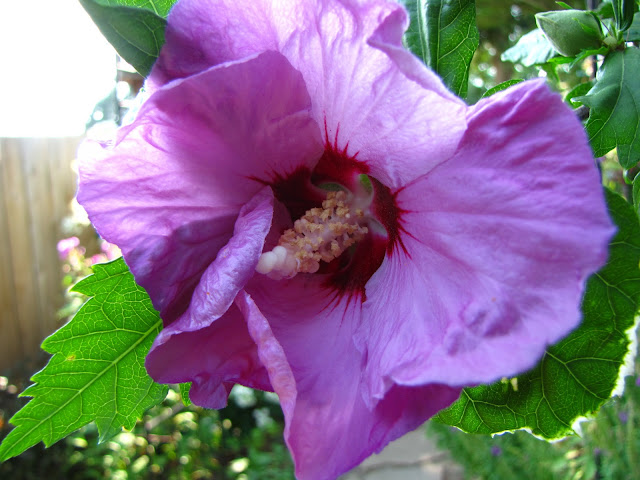 The Rose of Sharon (Hibiscus syriacus) has started to bloom and the bumblebees are very happy about that. 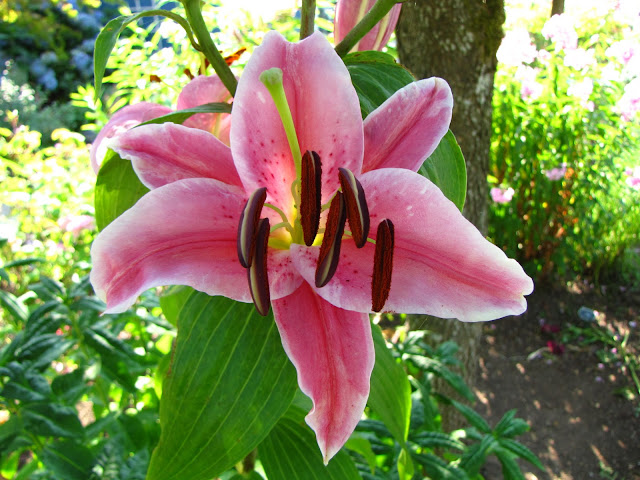 Some of the Oriental Lilies are blooming.  They are smaller than usual this year, but I'm just happy to see them. 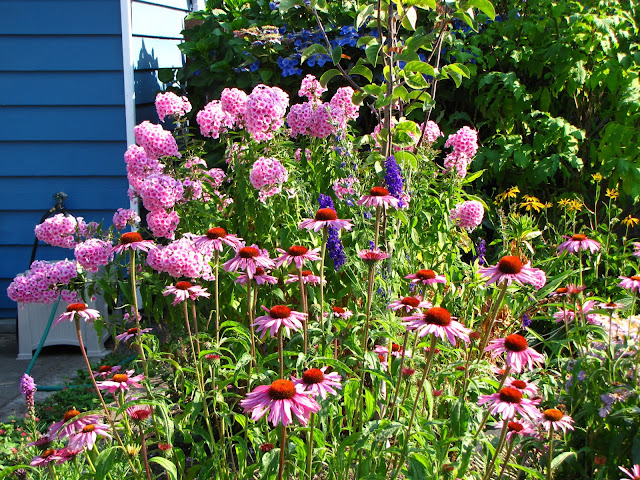 The driveway garden has a row of Lavender blooming right in front of this area.  It is covered in just about every type of bee possible.  A very strange bee looking insect was "attacking" the other bees, it even came after me.  I tried to get a picture of it but it wouldn't land long enough.  I think it was a drone fly, which is a honeybee drone mimic.  It's interesting how many insects you can find just watching one small spot in a garden for a short time. 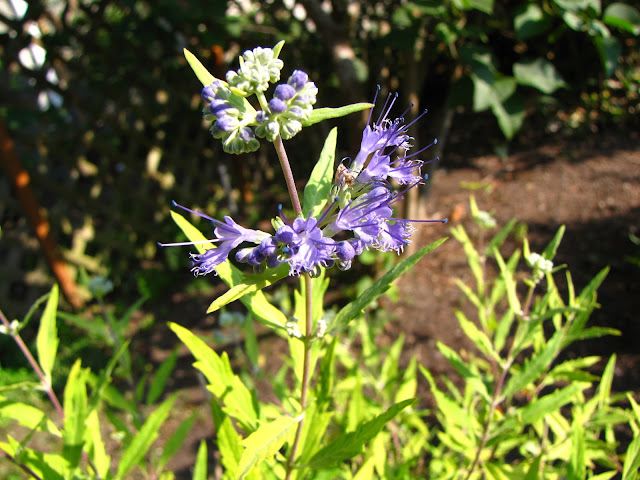 Caryopteris 'Wocester Gold' was moved during the heat of the summer last year and survived. 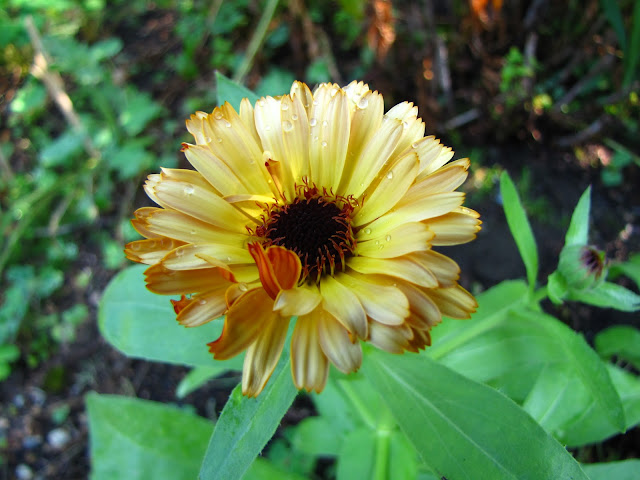 My very first Calendula which was grown by seed sent to my by Laurie.  This was another seed I had given up on ever seeing grow.  I was very happily surprised while out watering to see this pretty flower. 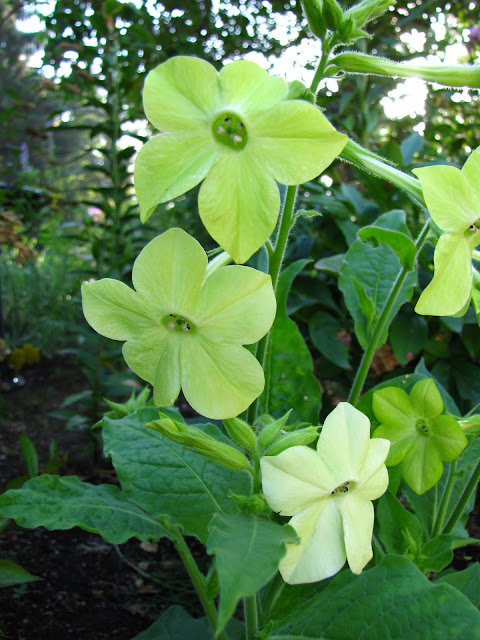 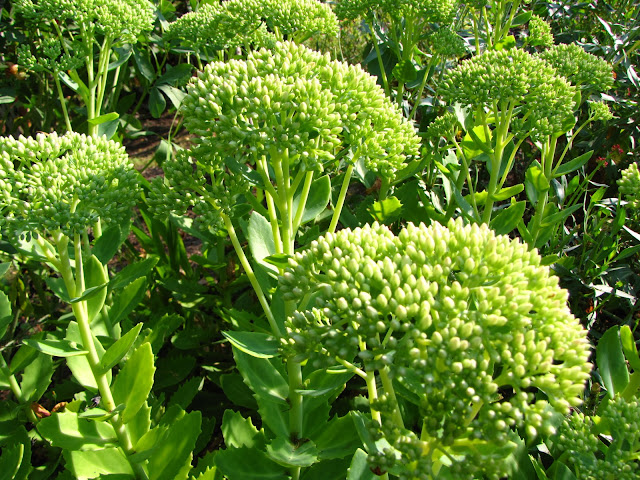 Sedum 'Autumn Joy' always reminds me of broccoli when it's at this stage. 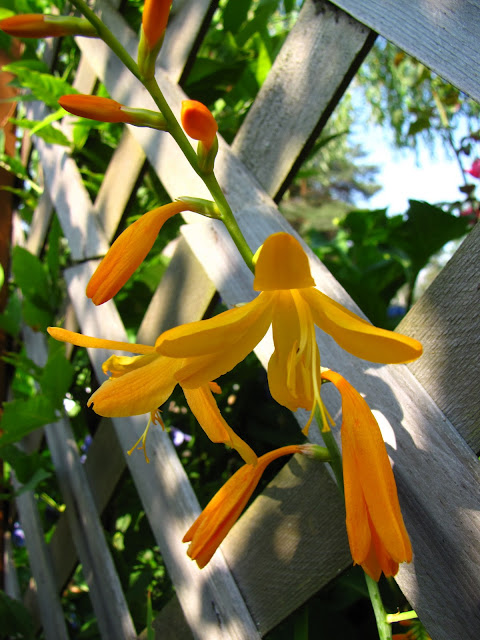 And this pretty flower was visiting from the neighbors yard.  It's hidden behind a Hydrangea in their yard and I guess thought peeking through the fence it would be admired.  I'm guessing it's a Crocosmia.  Maybe it knew that just a few feet away is the Crocosmia that Darla sent me is growing, although I don't think it will bloom this year.
Now today I need to get out and do some watering.  I've been very lazy about it this summer.  We started off so wet here and it hasn't been that hot so the ground hasn't really dried out.  But the poor containers and newly planted things still need regular watering.  It seems like when I'm standing there watering with the hose is often when I notice the new things happening in the garden.