I thought for this Fertilizer Friday I'd show some of the blooms that are starting on some of our fruit trees and bushes. Every year at about this time I start checking to see if there are flower buds. Growing fruit in our garden is one of my favorite things to do. For some reason they always seem to be a little easier than vegetables for me. I don't really fertilize any of them other than fresh compost around them in the Spring. 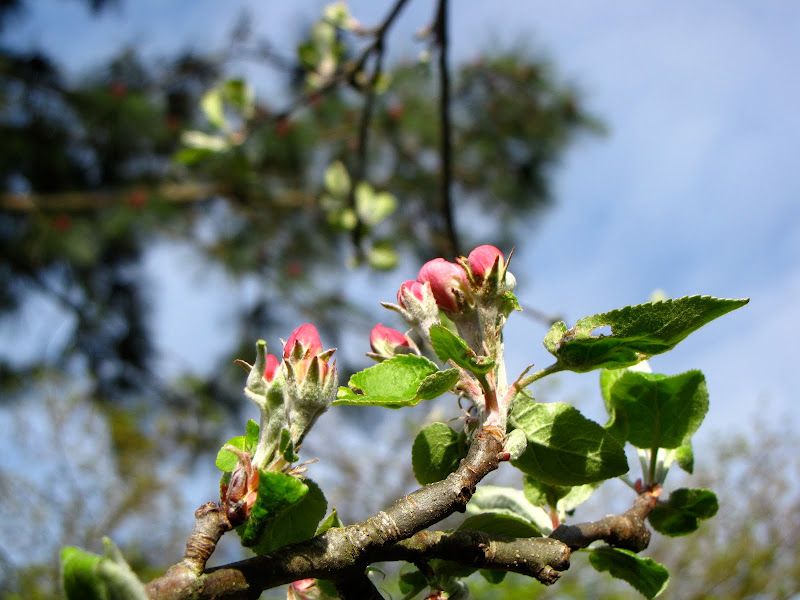 We have a dwarf 5 way grafted apple tree, there are 5 varieties of apples grafted onto a dwarf rootstock. While it's fun to have so many types of apples on one tree, it does make for a strangely shaped tree. Almost every year we have problems with worms in the apples and since I don't want to spray with pesticides, this year I'm trying Coddling moth traps to see if it makes a difference. The moths are lured to the trap which contains Tanglefoot. Tanglefoot is very sticky and the moths then aren't able to leave to lay their eggs. 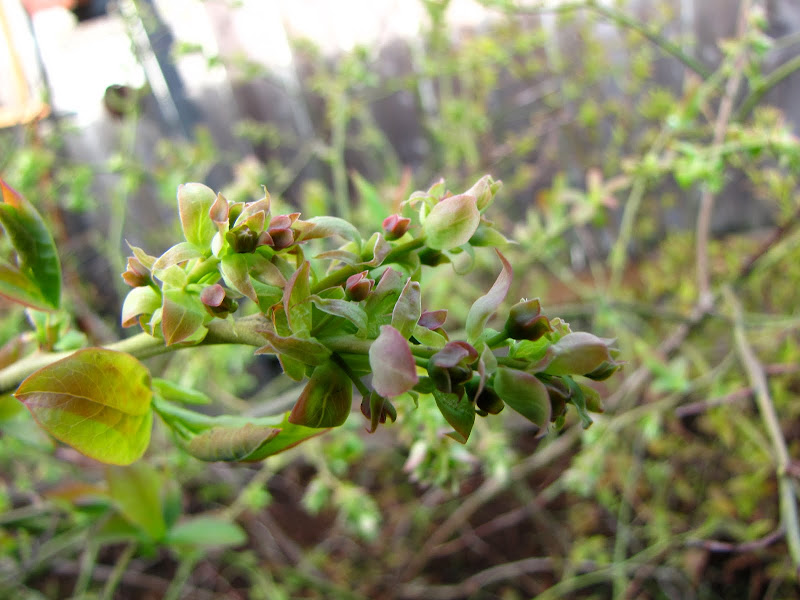 'Duke' our most productive Blueberry. 'Bluecrop' has been by far the least productive. This year it seems to be the only with no buds. 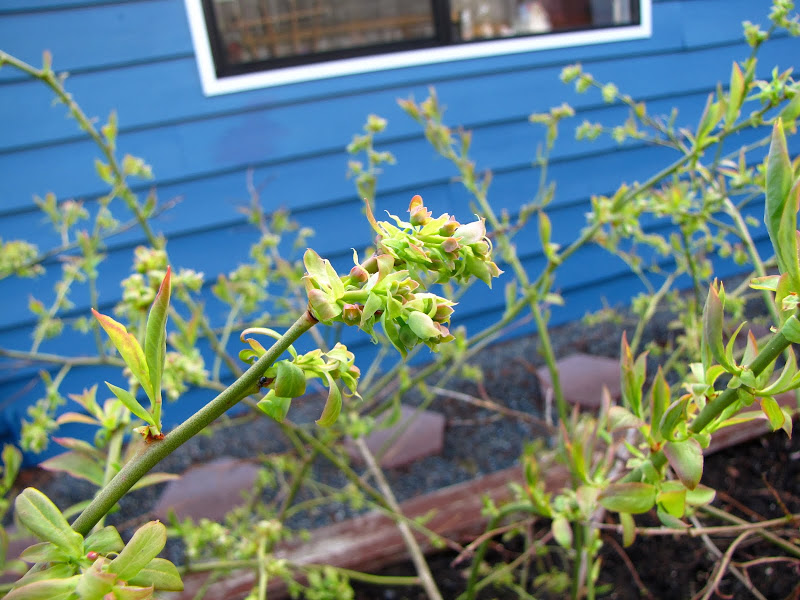 'Jersey' Blueberry is just now sending out the flower buds.
We grew 5, now 6 varieties. The newest variety are Pink Blueberries! Can you tell we love Blueberries? To me there is nothing better than blueberries picked fresh from the bush. I was a bit worried earlier that there were no flower buds. Normally the flowers come first with the leaves coming after. This year it seems to be in reverse order for some reason. I guess I'll blame it on the weather ☺ 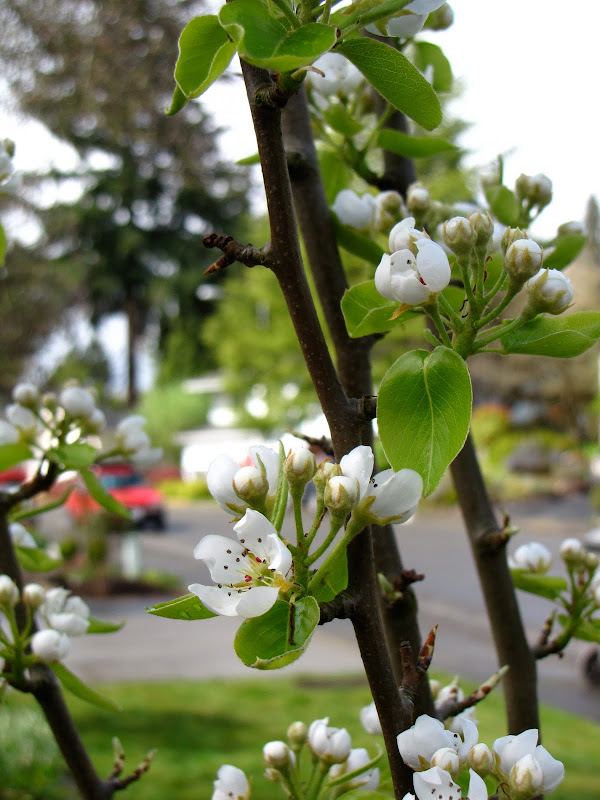 One of our dwarf Pear trees, 'Comice'. The other is an 'Orcas'. When we learned about pear trees we discovered that like many other fruits you need two varieties to cross pollinate. It's important that the the varieties bloom at about the same time. We also found varieties that are known to do well in this part of the Pacific Northwest. This is only their second full year in our garden so we're hoping that this year we might get a few pears. They look so pretty right now covered in white fluffy flowers. 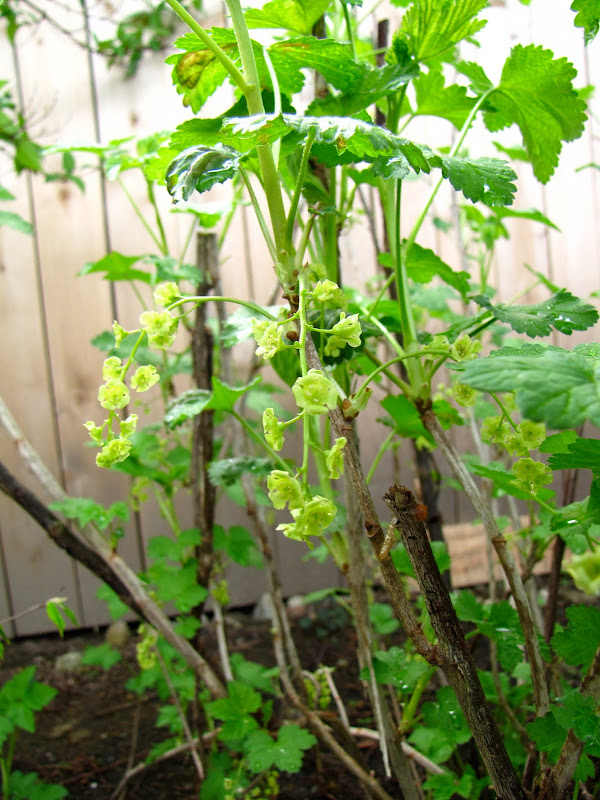 Currant (Ribes rubrum) 'Wilder Red' is actually growing under a Cedar tree and does really well there. Each year it produces lots of red currants, they aren't one of my favorites but they sure are pretty when they are bright red and hanging in clusters.

We also grow a Fig 'Desert King' which has just barely begun to show leaf buds and strawberries which won't have flowers for another month or so. The Meyer Lemon tree which we brought indoors when the weather got cool still has a few lemons left trying to grow. One of them is about quarter sized, and I'm crossing my fingers it can hang on until I put it back outside in a couple of weeks.
Fertilizer Friday is hosted by Tootsie at Tootsie Time each Friday. Visit her to join in or to see who else is "flaunting their flowers."