Yesterday was the day we released the butterflies we've been watching grow.  I knew it would be a great day since the weather had warmed up a bit and it was sunny.  My daughters and I had ordered a butterfly habitat from insectlore.com and watched as tiny caterpillars grew, then hardened into chrysalids and then about a week later emerged as beautiful Painted Lady butterflies.  Painted Lady butterflies are found throughout the United States and many other parts of the world.
When they arrived they were in a little cup that contained the food that they would need.  The caterpillars were so tiny and still I thought they may have died.  According to the directions that was normal.  They became active a day or so later, crawling all around in the cup and grew much larger.  In about a ten days they crawled up to the top and curled up, and formed chrysalids.  Once all 5 were ready we pulled the lid off the top and gently pulled the special paper off that they had attached to and hung it inside the butterfly habitat. 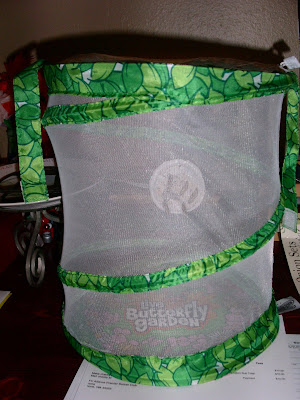 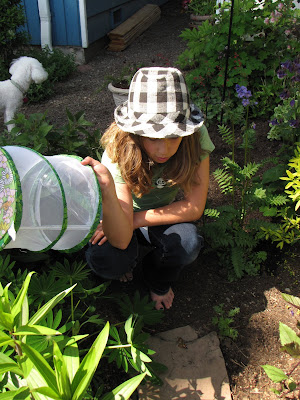 Sweet Pea watching out for the resting butterfly.
Three of them took off right away.  One of them first stopping off at the dogwood for a rest.  The other two took a little longer to decide to fly away. 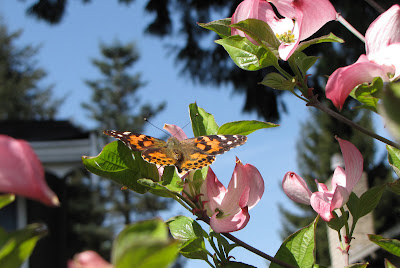 This was the only one to land directly on a flower, a pretty one too! 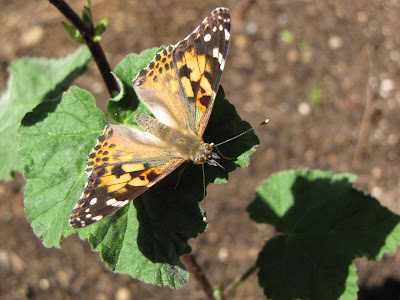 Another butterfly waiting on a lavatera leaf until it was ready to leave.
Now we have added to the pollinators in our area, hopefully they'll help a lot of flowers around here.  This was a neat learning experience, very educational for both my girls and me! 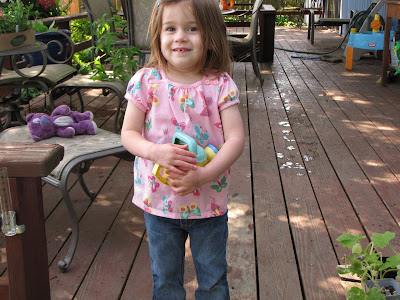 The littlest gardener wore her new butterfly shirt for the occasion.
I would definitely do this again with my girls and use this same company.  All 5 caterpillars became butterflies, you can't beat 100 % success!
I've seen other butterflies around our yard over the past few weeks, mostly the Cabbage Whites.  I know we'll be seeing a lot more soon too.  Hopefully the relatives of the Painted Ladies we released will be back to visit us.

Posted by Catherine@AGardenerinProgress at 8:48 AM